US Dollar history since 1980 - and how it affects GDP

The USDX is the indice that measures the relative worth of the US Dollar to the rest of the world. Here is a graph showing how the US Dollar has performed since 1980: 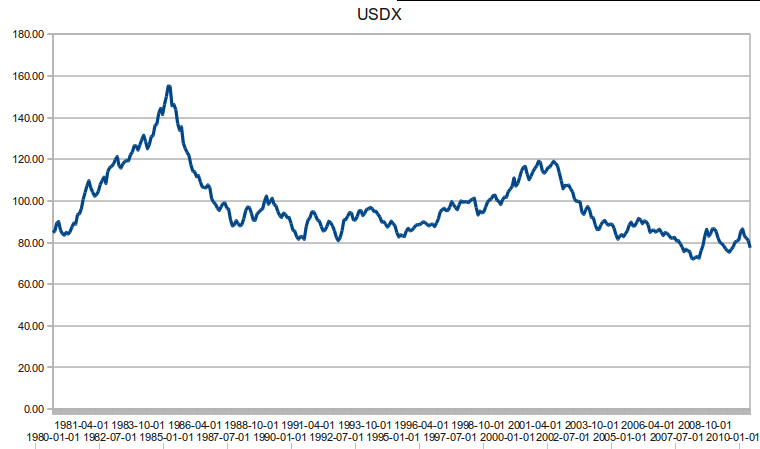 As you can see, there was a huge increase in the mid 1980s. The Plaza Accord wiped out the value in the second half of the 80s, while the late 90s saw a resurgence in the US dollar, partly as a result of panic induced by the Asian Economic Crisis, and partly by the Dot-Com Bubble. The large swing upwards in 2008 was due to panic induced by the 2008 Credit Crisis, when investors dumped shares and fled to the safety of treasuries, which naturally drove the US dollar up.

Now if we add Real GDP to the mix, we can see just how well the United States as an economy has performed against the rest of the world. The idea here is that we look at Q1 1980 as the baseline (100), and then adjust each quarter's GDP performance by the 12 month USDX average. I chose to average out the USDX over twelve months rather than three months because otherwise the graph would look a bit too shaky. Here it is: 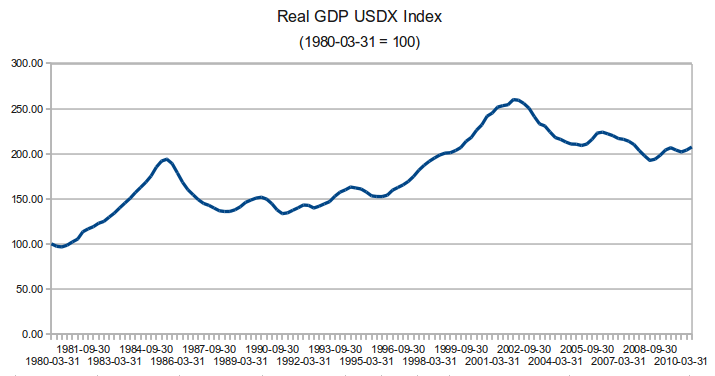 GDP then peaked at 259.93 in Q1 2002, which is interesting since this was after the early 2000s recession had peaked. Obviously the drop in GDP was more than made up for in the rise of the US Dollar. Since 2002, the US has been in a protracted fall in real GDP measured against the value of the US Dollar, the trough being 192.54 in Q3 2008 (just when the credit crisis was hitting the most). Since then there has been a small rise, but not by much. The Q3 2010 indice was 207.38 (awaiting GDP revisions), which means that the US economy has barely doubled in size since 1980.

Now we look at Real GDP per capita. This is an important measurement because it examines economic performance per head of population rather than just output. Measuring Real GDP per capita is probably the broadest way to measure whether an economy is growing or is in recession. If we adjust it according to the USDX, we get this: 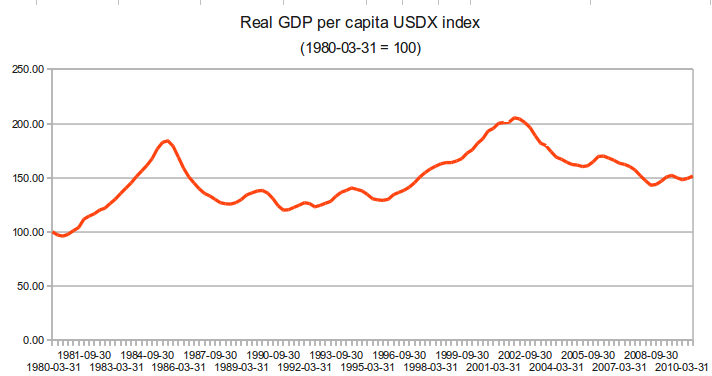 This, of course, looks worse than Real GDP. In fact the latest indice on my spreadsheet for Q3 2010 is 151.48, which means that economic growth per person is only 50% better than what it was in 1980. Peaks and troughs are pretty much the same as Real GDP.

The last thing I want to look at is the performance of public companies in the US. The Russell 3000 Index measures market capitalisation and has been running as an indice since September 1987. If we adjust the indice by the USDX (monthly values for both) we get the following graph: 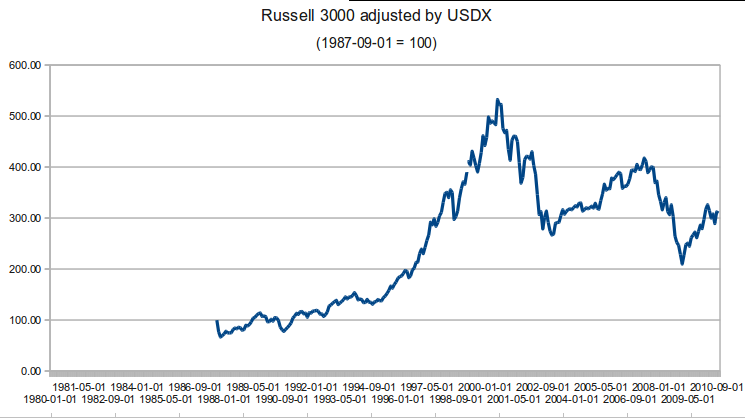 In many ways you can see just how damaging the Dot-Com bubble was - each successive peak appears to be lower than the previous one. And remember that this takes into account the relative value of the US Dollar, which means that while Market Caps (and the Russell 3000) might be increasing, the US Dollar might be lowering in value - so what we're seeing is US Market Capitalisation in the context of the entire global economy.

If anyone wants the raw data on my spreadsheet, contact me and I'll send a copy to you. Having my data and conclusions verified by others is a pleasure (even if it means that I have been proved wrong).
Posted by One Salient Oversight at 14:24

How do you index GDP against the 12 month average of the dollar? I am trying to update your data for 2018 bc it's really good - but i can't figure it out.