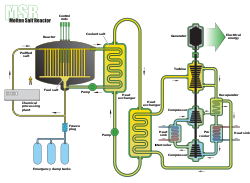 I'm not, as yet, prepared to do a back-flip on Nuclear power. However the proposals behind reactors powered by Thorium, rather than Uranium, are quite compelling. Here's a summary of the advantages:

I do, however, have some concerns:
While I like the potential behind Thorium reactors, the danger posed by the concerns I have just outlined make me wary. Unstable third-world nations need a safe and reliable source of non-carbon emitting electrical energy in order for them to progress without harming themselves or the rest of the world. Coal and Gas plants in third world nations are "safe" but produce carbon dioxide. If they were replaced by (for example) wind, solar or geothermal energy then electricity would be available that is both safe and good for the environment. But a dictator who has a Thorium reactor under his control is far more dangerous to his nation and its neighbours than a dictator with a bunch of wind turbines under his control.
Posted by One Salient Oversight at 17:51

I knew absolutely nothing about this. Very interesting.

Thorium cannot be used to make a nuclear explosion. The reaction must be driven by an external source. As soon as this source is removed, the reaction stops. A Chernyobl cannot happen with a thorium reactor

There was no thorium bomb in the 1950s. I guess you can scatter radioactive thorium with a conventional blast, but is it any more dangerous than spent uranium, now being used in bullets and shells? Besides, terrorists could grab medical isotopes and scatter them too.

The powers don't want to make thorium reactors, they want their deadly plutonium

Wind and solar power are inconsistent sources. A generator fuelled by ethanol is consistent and reliable, and carbon neutral as the co2 is absorbed by plants, which are later turned into more ethanol. Geothermal and hot rock (radioactive granite) sources are reliable early on but gradually cool.
1st world countries must subsidise 3rd world power or they will take the cheapest path