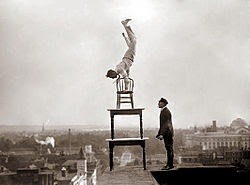 This is in response to an article in The Guardian).

In order to argue that a "savings glut" exists, we must assume that a considerable amount of people all over the world have been busy not spending and not borrowing. This finds its expression in the current account status of particular economies - China, Japan and other nations have huge current account surpluses as the people in those nations save and produce rather than borrow and consume.

To argue that the world is suffering from a "savings glut" is to place the blame on one part of the world over another. America has been part of a "borrowing glut" and needs to take responsibility for its part in the world economic crisis.

Of course there is the idea that some nations should go through a savings phase or a borrowing phase. The problem is that with national currencies, such necessary phases lead to currency speculations and eventual imbalances. Just as it was right for the market to invest heavily in tech stocks back in the mid 1990s, so was it wrong for the market to over-invest in such stocks by the late 1990s. The same goes for currencies.

It is here that the advantage of a shared currency zone comes about. The European Union's current account has been very low since the introduction of the Eurozone in 1999. The Eurozone's current account was last recorded at -0.9% of GDP, which is very low compared to the -6% run by the US over the years and the +6% run by China over the same period. Yet within the Eurozone we see a number of nations running very different current accounts, with Germany and the Netherlands running large current account surpluses and Spain and Greece running large deficits. Yet because these countries are part of one currency zone, such differences do not result in currency speculation.

In the current situation, nations with large current account surpluses (such as Japan, China, Sweden, Switzerland, Hong Kong, Malaysia, Singapore, South Korea, Taiwan, Thailand) need to revalue their currencies (sell off US dollars and buy their own currencies), lower their interest rates and set up fiscal stimuli. By doing this, these producer nations will begin to consume more and save less. At the same time, nations with large current account deficits (USA, Britain, Australia) should encourage savings by increasing interest rates. While this will depress domestic demand in these countries, economic growth will be focused more on the external demand driven by the stimuli enacted in the first group of countries.

As it stands now, unfortunately, the imbalances remain. The US, Britain and Australia have enacted stimuli while nations with large current account surpluses have protected their industrial base by keeping their currencies low. It's simply more of the same and does nothing at all to solve the problem except in the short term.

Posted by One Salient Oversight at 12:47