Blowing my own trumpet 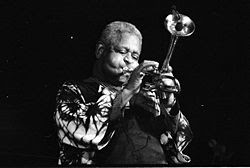 At some point in the future I aim to begin formal study of economics. I think I'm good at it. Moreover I think that I'm damn good at it.

Over the years I have occasionally interacted with "real economists", either through the post or in person. I have proposed some of my ideas, only to be dismissed. This obviously means that a) I am a crank, or b) They don't know how brilliant I am. Believe me, I have often pondered the fact that I am a crank.

It wasn't until I began being taken seriously at the Angry Bear blog that I got the "kudos" I think I needed. I made mistakes too, which is common amongst informed amateurs like myself. The problem, though, is that I am self taught and outside the mainstream.

The problem concerns my own self understanding. I see myself as a logical thinker, so I have to rely upon things like facts to inform my own view of myself. Once I tried to be a comedian at a friend's wedding and the experience taught me that I was not going to become a good comedian. That's fine.

Back in 1996 I began developing a zero unemployment idea. I have revised it and retitled it and added to it and subtracted from it, and it is viewable here. My basic idea was that the labour market functions as a market, and that raising the price of labour through legislative means (the minimum wage) will only result in unused labour and thus unemployment. Having a system whereby unemployment is eliminated and workers get a decent income requires a form of wage subsidy, whereby the government "tops up" the wages of workers who are hired in an economic environment in which business can pay as much as it wants to for labour costs. I thought that it was a brilliant idea - it was pro-free market in the sense that employers could pay employees as much or as little as they wanted, while at the same time being socialist in the way that the wage subsidy ensured that no worker would be forced into wage slavery. Of course the important thing to realise here is that the result would inevitably be higher taxes to pay for such a redistribution.

So I took this proposal to an economist at a nearby university. I spent a hour trying to make him understand but he was coming from a completely opposite perspective - he argued that legislating higher wages will result in better conditions and lower unemployment. The fact that he worked for a think tank committed to lowering unemployment was interesting too. After being poo-pooed by him you'd think that I had sense enough to see that I was a crank, but no. I was convinced by my own research and then sent off my work to a bunch of famous Australian economists. Only one replied. In that letter he basically told me that my idea seemed to be influenced by Milton Friedman's "Negative Income Tax". While there was no "my goodness you are brilliant" or "please give up insulting me and the study of economics" lines in the letter, it was nevertheless encouraging. Think about it - I had come up with an idea, all by myself, that the famous Milton Friedman had come up with!

This was obviously self-motivating. Someone could probably say "this guy has copied a bit of Milton Friedman's work", but the reason why it was self motivating was that I had never read anything by Friedman. I knew that while I had come up with the idea by myself, that there was always a possibility that someone had come up with it before me. That this famous Australian economist had said so confirmed it to me.

Early on this year I was shopping and discovered a book titled "Little Book of Big Ideas - Economics". It was a summary of the ideas of famous economists and those who had influenced economics. What was interesting was that it included the input of such ancient luminaries as Aristotle, Thomas Aquinas and even the 14th century Muslim philosopher Ibn Khaldun. So I bought it.

And then I discovered the section on Edmund Phelps. The 2006 Economics Nobel Prize winner guy. Here is the relevant section that I will quote:

In Phelp's 1997 book "Rewarding Work", he proposes that government pay firms wage subsidies to promote employment and higher wages for workers. The idea is that some workers can only earn a low wage, if based solely on productivity, so the firm can only pay them a wage that is so high. Many of these workers may prefer not to work for such a low wage under these circumstances, and choose to receive government benefits. If government steps in and subsidises a higher wage, this can draw such workers into the labour market and out of the dole. Thus employment can increase and dependence on government handouts fall, with workers earning a wage that provides a higher standard of living even while firms only pay what makes economic sense to them. Phelps calculates the cost of such a plan and concludes that it is affordable, given the benefit of higher income and employment.

I was gobsmacked. Literally. So literally that a gob flew down and smacked me.

This was, of course, what I needed to continue. My idea, my "Zero Unemployment Economic System" that I had been developing since 1996, had been formulated independently by an important economist (and eventual Nobel prize winner) at around the same time, and published.

Nevertheless someone might argue that I had merely "stolen" Phelps' ideas somehow. I suppose that is a possibility - but for myself I know that my idea was my own, which is why it motivates me. If I can come up with an economic system similar to that of a Nobel Laureate in economics, and do so completely independently of him and independent of any formal economic training, then, logically, I must have some level of brilliance.

What interests me, of course, is that none of the economists I interacted with were able to see that my proposal was similar to that of Edward Phelps proposal in "Rewarding Work". What also interests me is that I was part of a small band of professional and amateur economists who foresaw the economic disaster that we are currently in. But, then again, I do see myself as a bit of a Cassandra - fated to know "the future" but not have the ability to convince anyone of it.

About 5-6 years ago I formulated another idea - whereby a government can eliminate taxation altogether, create its funds by fiat and keep the resulting inflation controlled by adjusting the money supply. I dismissed it as too strange even for myself, but I kept coming back to it. Once I began to understand how the reserve requirement affects the money supply, I realised that this idea might work. I call it my Zero Tax Economic System. I still think it will work, and I also unaware of anyone else who has proposed it. Why continue to think it might work? Apart from being convinced by my own argument, I do have the Edward Phelps link - if I can independently come up with something that an Economics Nobel Laureate can come up with, then maybe I am worth listening to.

And that's why I have decided to blow my own trumpet.
Posted by One Salient Oversight at 17:05

Yes, I think you should study economics. At some stage you should probably also consider the possibility of doing a PhD in economics. I think that would be a suitable path for you. Obviously there's quite a few things that would need to happen between now and then for that to become a reality and I'm certainly not advocating putting the cart before the horse but somewhere in the back of your mind the possibility of doctoral study should be there. You certainly have the level of interest in the subject and the general academic ability to make a PhD a real possibility.

Just don't take up the trumpet.