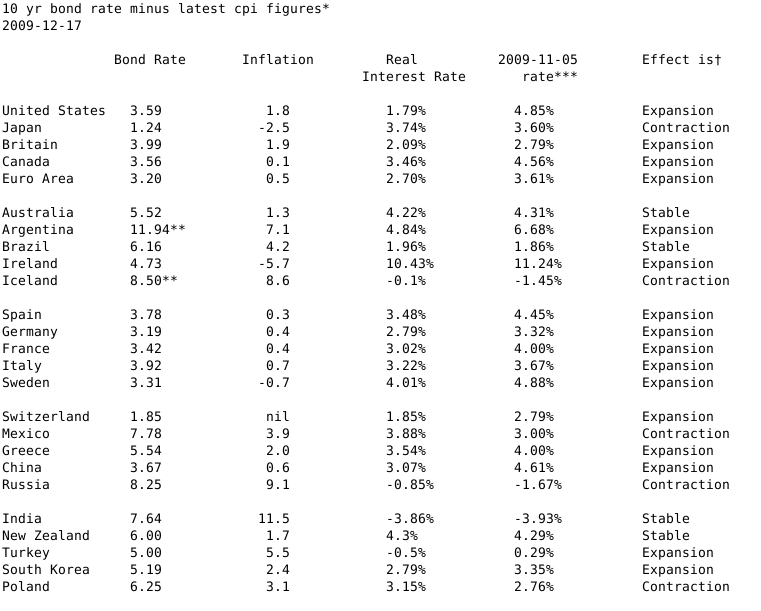 Since November, real monetary conditions have improved markedly in the United States, dropping from 4.85% to 1.79%. This improvement has come solely from an increase in inflation, rather than any decrease in rates, which have remained steady during this period. With conditions this positive, we can probably expect 2009 Q4 GDP to be around +3%. The decrease in real interest rates to such a low level indicates that inflation is finally on the rise, which means that the Federal Reserve is likely to push rates up in 2010, or else run negative real interest rates to try to boost the economy - a process which would end in disaster. The speed at which real interest rates have dropped in the US is an indicator of a dangerous inflationary environment in the near future. 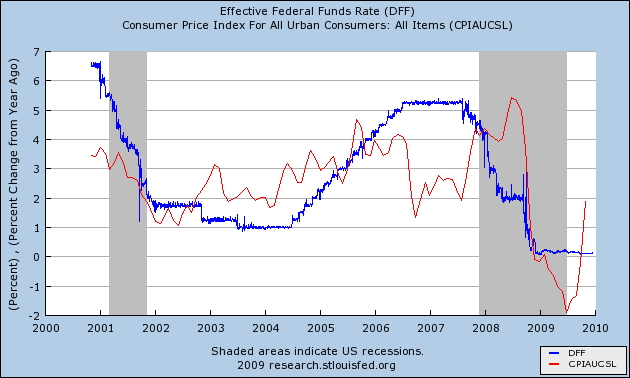 According to this measurement, the US is already experiencing negative real interest rates (using the effective federal funds rate as a benchmark rather than 10 year bonds)

10 year Bond rates in Ireland have plummeted from 5.04% to 4.73% in one week, pushing real interest rates down from 11.64% (in November) to 10.43%. This is an indicator of the market's response to Ireland's horror budget cuts and the belief that Irish government bonds are not as risky as they once were. Nevertheless, deflation reigns supreme in Ireland and monetary conditions are still awful. Ireland will have to rely upon a recovery in Europe to boost demand for its goods which will, in turn, act to inflate prices (and thus lower real interest rates).

In response to its economic crisis, Iceland chose to inflate rather than protect their currency. The result has been high levels of inflation along with growing unemployment, though by deliberately debasing their currency they delayed the inevitable economic crash. Now that delay is over. With real interest rates near zero (but still negative), monetary conditions have tightened as interest rates finally begin to lower inflation. Iceland's economy is beginning to seriously contract as a result.

Monetary conditions in Japan have stagnated somewhat, leading to an increase in real interest rates since November. This has led to the BOJ keeping interest rates at a record low and the government promising $81 billion in stimulus. My solution would be for the BOJ to create lots of money by fiat and use it to pay off government debt, which would a) help fix deflation, and b) help reduce government debt. Japan needs to increase domestic consumption rather than rely upon exports to help fix their economy.

Despite budget problems in Greece and Spain, real interest rates in these two Euro Area countries has improved.

Both Australia and New Zealand have had stable monetary environments since November, indicating a move towards a neutral monetary stance on behalf of their central banks.

Posted by One Salient Oversight at 11:23