The US Government needs more revenue

Oh dear, Standard and Poors rating agency has maligned the US by dropping its Triple-A bond rating. Strangely enough this event has brought both progressives and conservatives together in maligning the rating agency itself, which is a fair call considering the cluelessness of ratings agencies generally in failing when 2008 hit.

Nevertheless there is a rather huge reason for the US being downgraded. I just played around with another spreadsheet comparing US and Eurozone debt, and I get the following: 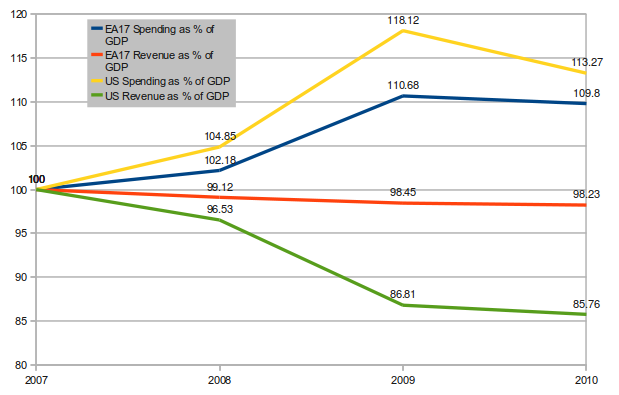 Okay, first of all you need to understand that this is an index - everything is assumed at 100 at the beginning.

Secondly, these numbers are based upon total government spending and revenue, which includes Federal, State and Local government. This is to ensure that US oranges are being measured against European oranges. You can find US figures here (on pages 345 & 347 of 360) and European figures here.

Fourthly, the figures for EA17 and EU27 are pretty much the same, which is why I didn't include EA27 (the entire European Union) in the graph.

So what can we learn?

The most important line in that graph is Eurozone revenue, the orange line in the middle. Despite the onset of the GFC, despite the tumult at the so called "periphery", Eurozone revenue has only dipped slightly. This means that the deficit, the space between revenue and spending, has been mainly caused by increased spending. Thus in a recovery, spending would drop off as the unemployed return to work while revenue from income tax would increase.

The second most important line in that graph is US revenue. The financial crisis since 2008 has decimated US tax revenue. Previous to 2008, US revenue and spending were around the same level (though obviously with less revenue than spending) but since then there has been a massive drop off in revenue. And while State and Local governments have certainly added to this, the main offender is the Federal Government. A recovery, therefore, would have to be more substantial for the US to ensure that the deficit is paid down.

This is not to say that Europe isn't in trouble. Nor does it ignore the fact that certain European nations have huge problems. Nevertheless in light of the recent debt wrangles in Congress you can understand the fragility of the US economy, the downgrading of debt and China's angry response to the problem.

However the biggest problem here continues to be the Tea Party Republicans and their decision to flatly refuse any revenue raising policies. When seen in light of the graph above, such an extremist position is seen for what it is: madness.

There's one more piece of bad news: since the chances are high that another recession for the US is on its way, we can expect the US budget deficit to widen even further before the end of 2012. While the debt ceiling has been raised enough to prevent any congressional wranglings before next year's presidential election, the question now is whether the new recession will blow government finances out so badly that another debt ceiling vote is needed before the election. God help us.
Posted by One Salient Oversight at 11:37