An analysis of the past 30 years

So I was playing around with my spreadsheet and some numbers recently and decided to work out just how much money has been invested in the sharemarket as a proportion of GDP. Of course we remember the time when the Dow hit 10,000 and unemployment was low - but it's currently over 10,000 and unemployment is high. This should indicate something strange going on, not to mention question the idea that the Dow represents the economy.

I couldn't use the Dow index, though. Instead I decided on the Wilshire 5000, which is an index that a) encompasses all shares in all publicly traded markets in the US, not just the top performing ones, and b) comes up with an index number that also closely approximates the dollar value of the entire sharemarket. For example, the W5000 index for 2011-08-18 (last Friday) closed at 11806.16, which approximates $11.8 Trillion. Historical numbers of this broad index can be found at St Louis, as always. So what happens when you look at this index and compare it to GDP? This: 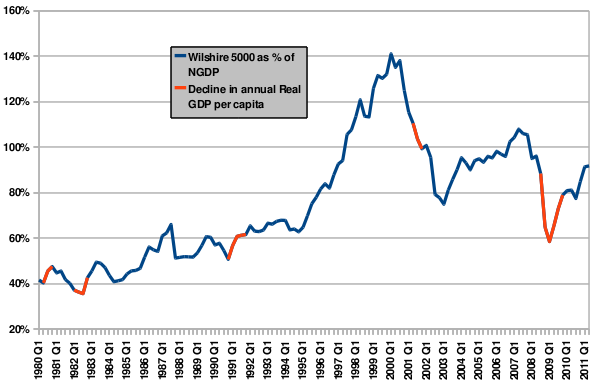 What appears to have happened is simple - there has been a sharemarket investment bubble that has inflated since 1995 and which has yet to be properly dealt with. My belief is that the higher the sharemarket value to GDP ratio is (as demonstrated by the graph above) the more chance there is of a bust and a damaging recession. Either the sharemarket needs to crash down or GDP has to increase to ensure a more sustainable level. Anything below 50% of GDP should be a policy goal. This can be achieved through a Tobin Tax or a Market Capitalisation Tax imposed upon the sharemarket - with taxation rates increasing the higher the ratio gets in order to prevent runaway over-investment.

This issue also reveals shortcomings in fiscal policy. Tax cuts for the rich have not resulted in a substantial increase in money velocity but rather a further investment into the share market.

Finally it also appears that our current economic state is the result of the tech boom's bust. We're paying now for decisions made by the financial market up to 16 years ago. While it is true that the 2008 credit crisis had a more damaging impact upon the economy and upon unemployment than the 2001 recession, we can trace back the credit crisis to the tech boom. 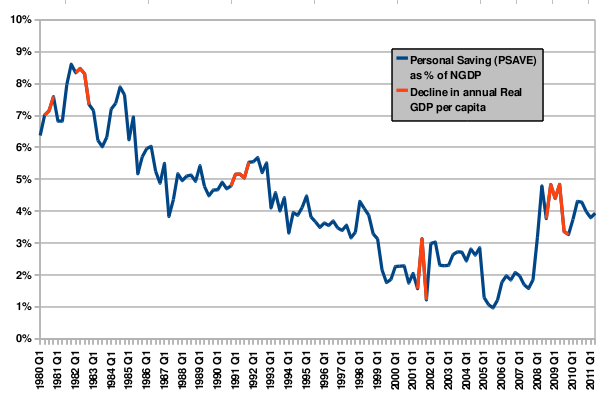 So since 1980 personal savings as a percent of GDP has dropped. In fact it dropped below the 4% level on a more or less continual basis since... 1995 Q2. Now where have we heard of that quarter before? Oh yes... that was when the sharemarket tech bubble started. In recent years the savings ratio has tried desperately to rise above 5% but has gotten no further than 4.84%

My belief is that too much personal savings is bad, but that too little is bad as well. If we assume that the 1951-1980 period was a better period for personal saving then obviously it should increase in these times. But it hasn't. Why?

The second reason is that GDP has grown substantially in response to sharemarket investment. While it has created a "virtuous cycle" for part of that time, it means that ordinary people have had less money in proportion to GDP for them to save.

But here's another graph: Public debt. 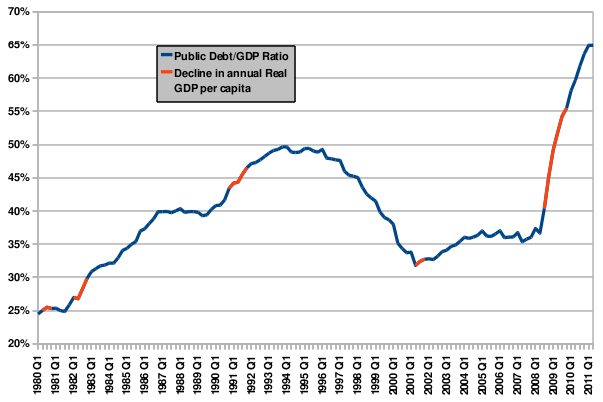 Well in one sense there was an increase in personal savings - investing in the share market. Share market investing, because it became so attractive, took money away from cash investment.

And the fourth graph is interesting too: The balance on the current account. 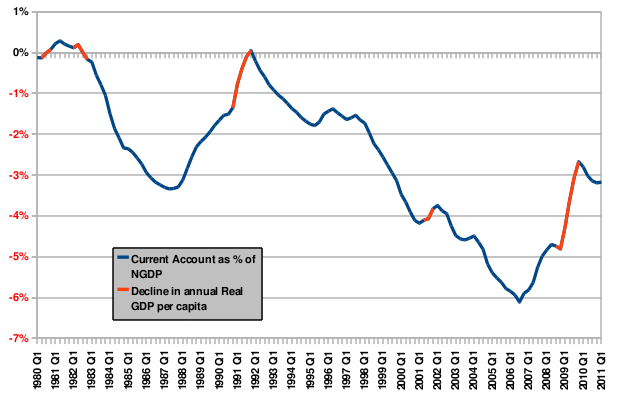 We need to remember that the world cashed in on America's sharemarket boom as well. The current account deficit hid inflation and prevented any meaningful tightening of monetary policy to rein in the asset-price bubble that had formed.

In light of this, what would OSO do?
Posted by One Salient Oversight at 16:19

Just wanted to say how much I enjoy your blog, having recently discovered it. I've no time for cogent commentary at the moment, but I'll be back.

ForexTrendy is a state of the art program capable of determining the most profitable continuation chart patterns. It scans through all the charts, on all time frames and analyzes every prospective breakout.