Here's some grotesque figures for you all: 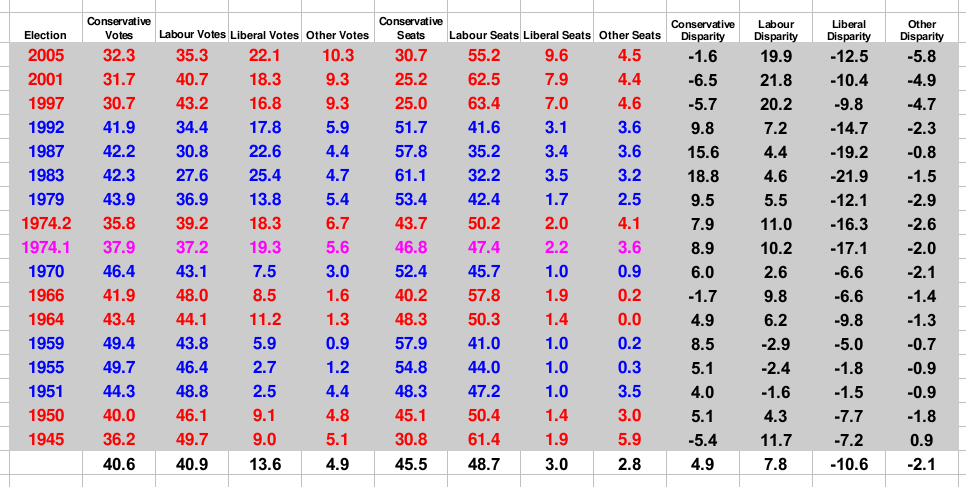 The numbers on this graph represent percentages - first of amount of votes and then in amount of seats in parliament. As you can see both the Labour and Conservative parties have, on average, enjoyed greater percentages of seats in parliament than the percentage of votes they gained. UK Labour is especially at an advantage here. Of course the main loser has been the Liberal Party/Liberal Democrats, who have, on average, had 10.6 percentage points less seats in parliament than they gained from votes, which is an enormous amount at the best of times but especially so for a party which has taken an average of 13.6% of the vote.

This situation is due to Britain's electoral system which rewards vote plurality. Although it is the simplest voting system that can be implemented it really only works in a two-horse race, in which it becomes a majority vote by default. The danger of an electoral system based upon a plurality of votes is that the party in power inevitably governs with the consent of a minority of people. Realising the dangers of such a system means that voters either give up voting altogether (their vote does not count if they live in a safe seat) or end up voting for one of the two main parties instead of the party they want.

Perhaps the worst case of a government being elected that did not have majority support was the 1983 election in which Margaret Thatcher was returned to power ostensibly on the back of a successful Falklands War campaign. If we look at the figures, though, we see an interesting situation, namely that Labour and the Liberals gained a total of 53% of the popular vote while the conservatives gained only 42.3% of the vote (a percentage of votes which, in other times, has led to electoral defeat for that particular party). Now while it would be remiss to assume that all of that 53% voted against Thatcher, the history of the time is important to consider. 1983 saw a massive drop in the amount of Labour votes - at 27.6% it was their worst post-war electoral result ever - while, at the same time, a huge increase in the amount of votes directed towards the SDP-Liberal alliance, the forerunner of today's Liberal Democrats. The SDP-Liberal alliance came about when a number of MPs defected from the Labour Party to form the Social Democratic Party in order to promote a more moderate social agenda than that being promoted by the Labour Party. They teamed up with the UK Liberal Party which had been marginalised for decades as the perennial third party with little to no influence. While the two parties had their differences, they obviously felt that their similarities were such that an alliance could be formed. Confronted with the prospect of voting for a hard-line leftist Labour party or a hard-line conservative party, many moderate Labour voters abandoned the party to vote for the SDP-Liberal alliance. In other words, the creation of the SDP and its alliance with the Liberals caused many Britons to reject both the reigning party and their traditional opponents. In effect, therefore, 53% of Britons did, in fact, vote against Margaret Thatcher in 1983 and probably did so because of her policies at the time. Yet the electoral system was such that it delivered Thatcher a second term in office. The election also kept the Labour Party entrenched as the opposition instead of being threatened by a resurgent third party, commanding 32.2% of the seats in Parliament as a result of gaining 27.6% of votes. The SDP-Liberal alliance, of course, were punished by Britain's electoral system, resulting in a paltry 3.5% of seats in parliament despite gaining 25.4% of votes. This result eventually led to electoral reform naturally becoming an integral part of Liberal Democrat policy since then.

The Liberals have, in fact, been a consistent force in British politics since 1974 when they gained 19.3% of the vote and were probably the reason for the hung parliament of the time. The United Kingdom in 1974 was, of course, reeling from various social and economic problems and electors turned to the third party to show their lack of faith in the two main parties - a situation which is being repeated now. The difference between now and 1974, and, more importantly, now and 1983, is that neither the Labour Party nor the Conservatives are likely to gain more than, say, 36% of the vote - Labour especially is likely to end up with less than 30%. Yet despite the problems with UK Labour, the Conservatives are not leading in the same way as they led between 1979 and 1992.

My own personal desire is for the Lib Dems to win a majority of seats in Parliament and for Clegg to become PM. Although the chances of that are low, they have improved somewhat since the first debate. Nevertheless the most likely result appears to be a hung parliament with the Conservatives having a plurality of seats and David Cameron thus becoming PM, and with the Lib Dems controlling the balance of power. Hopefully this situation will force electoral reform.

My own preferred electoral system is and will remain Demarchy. I doubt that Clegg and Cameron will introduce a British Demarchy, so what is my wish list for UK electoral changes?

What I like about my proposed system is that it results in a net drop of politicians from 1383 (733 Lords + 650 elected MPs) to 1300 (1300 elected MPs) while increasing a more proportional system of government. I prefer unicameralism over bicameralism (ie two legislative bodies) because it will make legislative activities simpler and more decisive once a decision has been made. While it is true that a secondary legislative body introduces checks and balances to the system, my argument is that a singular legislative body that is appointed by a proportional electoral system will itself provide the necessary checks and balances.

I also like a Unitary system of government. I may have Scottish blood in me but the idea of devolving too much power to Scotland, Wales and Northern Ireland is not necessarily a good thing. I don't want a Federation. Besides, the Scots the Welsh and the Irish already have MPs that can act on their behalf.

Getting rid of the Monarchy and having an elected executive would be a good idea too, but I doubt that Clegg will be able to pull that off. That would be too much too quick and something that would need some level of public support behind it. It would also need a decisive referendum and should probably be considered only after a more proportional system of government is introduced. Say, maybe in 10-15 years when Charles ascends to the throne?
Posted by One Salient Oversight at 12:38