Is the US economy slowing?

Well maybe according to my study of real interest rates. Here we go: 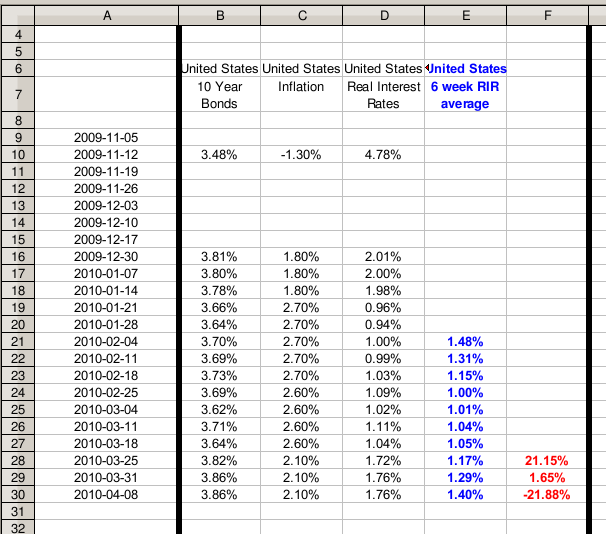 In the wonderful "Spread Sheet"TM screenshot you see above, you can see the columns marked 10 year bonds and inflation - all of which were derived from data from The Economist magazine (I do have better data sources for the US, namely this and this, but I use The Economist as a way of comparing rates all over the world). Weekly Real Interest rates can be seen there in column D, which are essentially (Bond Rate) minus (Inflation Rate). Now since real interest rates go up and down because the bond market goes up and down, I've focused mainly upon column E, which is the average Real Interest Rates of the previous 6 weeks. Now Column F looks at the changes over the six weekly period and we see that things were going along quite swimmingly on 2010-03-25 but have hit a wall in the two weeks since then. From dropping to a 1.00% real interest rate on 2010-02-25, rates have increased to 1.40% since then.

The data shows that this increase in real interest rates is due to two things - a drop in inflation (from 2.6% to 2.1%) and an increase in bond rates (from a low of 3.62% to 3.86%). In fact 10 year bonds passed the 4% barrier on 2010-04-05, which was the first time since 2008-10-31. There are probably multiple reasons for the increase in bond rates - certainly the booming stockmarket could be one as investors offload safer assets to buy shares, and the Wilshire 5000 looks like this: 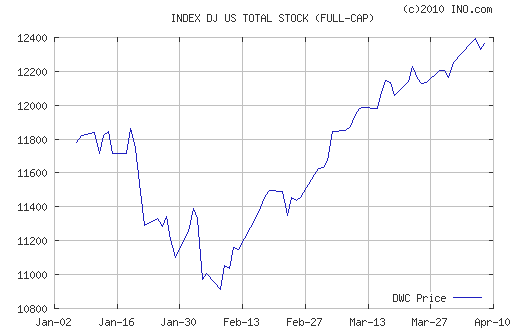 (image from here)
...which shows a nice increase in broad share prices since early February, the period in which real interest rates have begun to increase. The US Dollar index hasn't gone anywhere, which indicates that people aren't selling off their US Dollar holdings to buy overseas bonds.

Certainly the situation looks like either a return to the low-inflation growth experienced in the late 90s or else is a harbinger of a slowdown - inflation has crept up and has peaked and is now heading down the other side. The pessimist in me sees this as a more likely scenario than a low-inflation boom - after all the rising tide of Obama's stimulus has to return back to the sea eventually, and this is usually what occurs when any Keynesian stimulus program is enacted.

The third possibility is that it is just a minor uptick, as I theorise here, except that the "uptick" has gone up further than it did a week ago.
Posted by One Salient Oversight at 16:33