I'm not unhappy with a Conservative win in the UK 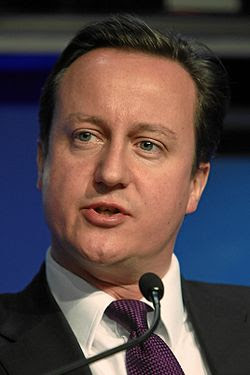 After reading about the TV debate in the UK between Gordon Brown, David Cameron (first picture) and Nick Clegg, I decided to watch the entire 90 minute spectacle. As a result, I am reasonably happy with the idea of a conservative win in the next UK elections, and with David Cameron as the next Prime Minister.

I watched the debate primarily to see how well Lib Dem leader Nick Clegg did, as it was reported that he "won" the debate. After watching his performance, I am suitably impressed with the guy, which is of course influenced by my own personal identification with Social Liberalism (the ideology the Lib Dems generally hold).

The problem is that Labor under Tony Blair, and now under Gordon Brown, has failed to live up to its promises from the 1990s. Labor billed itself as "New Labor" but ended up involving the UK in the Iraq war as well as overseeing a housing market crash that could have been avoided if good policies had been implemented. While it would be unfair to blame Gordon Brown and Labor for the current UK recession, there is no doubt in my mind that their policies helped it to occur and have exacerbated it. All these things were in my mind as I watched Gordon Brown, who is probably quite a nice bloke, during the debate. The result for me was that nothing Brown said or promised or debated had any substance. I lacked trust in him, which affected everything he tried. Moreover he looked tired and craggy in comparison to the two younger leaders who were in the debate with him.

What made me like David Cameron is that he was not an American Republican party operative denouncing socialism nor promoting capitalism nor painting his political enemies as enemies who must be destroyed. Cameron proved to me that conservatives in Britain at least have managed to avoid the hard line ideological disease that is afflicting the American right. In light of the current health care debate in the US, Cameron stuck by his support of public schools and the National Health Service (NHS). When confronted with the tax cuts promised by Nick Clegg for the Lib Dems, Cameron tut-tutted the plan, arguing that such tax cuts could not be supported. These were not the words of a boilerplate ideological conservative but someone who is aiming at convincing the centre of the political spectrum. Naturally he also tut-tutted Gordon Brown's new tax proposals - no conservative worth his salt would ever support an increase in taxes - but was not an "over the top" conservative. Of course I'm not saying I completely trust Cameron's promises, but what it does show me is that the Tories are just not the radical right every leftist wants us to believe. Case in point: Thatcher did not destroy British public schools in the 1980s and the NHS still existed under her reign. They weren't helped much either, but at least the Thatcherite conservatives had enough brains to leave them in place. Cameron and the conservatives of Britain today are unlikely to have moved from this position, which means that any potential conservative government under Cameron is unlikely to see many major anti-welfare policies (eg massive cuts to public education and public health) that would preclude any informed centrist or non-partisan centre-leftist from voting for them. Of course I do expect the conservatives to make some painful budget cuts to rebalance the budget, to make some more reactionary anti-immigration policies and to favour the rich in any new tax system they introduce - but certainly nothing too radical for the British people to be uncomfortable with. 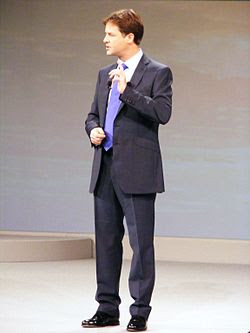 Nick Clegg (second picture) won the night by channelling Barack Obama. He presented himself as personifying hope and change - both of these two subjects were strong in his presentation. By contrast he portrayed both the Conservatives and the Labor party as being ineffectual and entrenched by the system. Clegg entered the debate without the same amount of baggage carried by both parties, which meant that neither Cameron nor Brown were able to throw any effective mud at him. He entered the debate clean and exited it just as clean. The Lib Dems, having not been in power ever, do not have the same level of public mistrust that both the Labor party and the conservatives have. Moreover, neither Brown nor Cameron were able to make any warnings that the Lib Dems lack experience or are too silly or too radical for Britain. Confident that the UK's grotesque "first past the post" electoral system will guarantee victory for one of two parties, it was obvious that Brown and Cameron underestimated Clegg and his ability to charm disaffected centrist independents.

Clegg and the Lib Dems do suffer in one big area - that of national defence. While arguing that Trident is no longer a plausible form of national defence (which is right), he is mistaken if he thinks that abolishing it would magically result in unspent billions of pounds that can be used to fund tax cuts and pay back the deficit. While the cost of maintaining and upgrading Trident would be huge, no single program can deliver the savings he and the Lib Dems propose - and that brings into doubt the tax cuts the Lib Dems are proposing. But there was more to this issue than was debated - what is the position of the Lib Dems towards nuclear weapons in general? While Trident is an important cog in Britain's nuclear deterrent, surely it is not the only cog? Like the US I am sure that the UK has a stock of short range tactical nuclear missiles along with aircraft deliverable nuclear weapons. Neither Brown nor Cameron was able to press Clegg on this matter, something they should do over the coming weeks until the election. Moreover, Clegg's complaint that a British company which makes Mine Rollers for American armoured vehicles does not take into account basic issues such as asking whether such mine rollers would fit onto British tanks. Moreover the idea that Britain has a company making such wonderful defence equipment should actually end up being a positive but Clegg used it as a negative. This shows me that Clegg and the Lib Dems do not have a very strong or informed national defence position apart from ditching Trident.

To be honest, though, I am looking forward to the Lib Dems holding the balance of power and for a potentially competent conservative minority government making some good decisions for the UK. Labor, though, faces a sullen future - they failed to gain power when they were their most leftist (during the Thatcher years) and they failed to govern properly when they were at their most centrist (during the Blair/Brown years). Labor needs to look at themselves honestly and clean their ranks of both crabby ideologues and vapid pundits in order to reinvent themselves.

One last thing... as I have mentioned before, Britain's electoral system is simply too grotesque to be pased off as a proper representative democracy. Changes to Parliament and the House of Lords were discussed during the debate and fortunately no party leader argued for the status quo, which means that some changes in the system could be ahead - but only if the Lib Dems hold the balance of power... I hardly think the Conservatives would want to change a system that granted them political power.

Posted by One Salient Oversight at 15:18

I suppose Libs Dem are inheritors of the Liberals (Whigs) who fell apart in 1920s with Lloyd George deals with Tories and then Labour becoming a force. A hung parliament with a balance of power will be "exciting".

Many Thanks for your review of their debate - most enlightening.
I thought Blair was a brilliant speaker in his early days but he was Labour!!!