Deficits and Debts - Punishing the irresponsible?

Poor Greece. Every step of the way the market seems to punish them. Just when they announce some decent deficit cutting measures, Eurostat comes out and publishes data which indicates the situation for Greece was more dire than was thought... and that after a number of revisions which were pessimistic anyway. The Eurostat publication is here and makes fascinating reading (that is, if you like horror stories).

Greece, of course, is one of the five PIIGS nations that people are worried about, the others being Portugal, Ireland, Italy and Spain. These five nations have been identified as having serious government debt problems, a situation that has been reflected in bond markets in recent months. What has been fascinating is the effect of the common currency upon these bond markets. With the PIIGS nations being part of the Eurozone, investors who have been scared away by these nations have not had the luxury of a currency meltdown. Instead, the problem has been shown up in the bond markets. So while German and Greek government bonds are both denominated in Euro, there is a spread between them that shows the risk involved (currently German 10 year bonds are 3.07% while Greek 10 year bonds are 8.07%). While some have argued that this shows the inherent weakness of a common currency area, I actually believe that the Eurozone concept will be proven strong and correct in the end - after all, those people in Greece and Ireland who saved their money have not been punished by having their real wealth depreciated by a plummeting currency and the inflation that would naturally result from it.

But I have also noticed amongst commentators and news reports that the situation is pretty bad amongst all PIIGS nations, and that Greece and Ireland are simply the first to fall. Spain, they say, should be next.

But in order to determine which country is at the most risk of sovereign default (ie choosing not to pay debt) I have devised an index that takes into account both the level of sovereign debt and the current budget deficits of the countries involved. I have made the assumption that a budget deficit of 10% of GDP is equal in risk to a debt level of 100% of GDP, and granted equal weight to these two figures. Mathematically it is quite simple - it is (Budget Deficit) + (Debt/100). So a country with a budget deficit of 5% of GDP and debt of 50% of GDP would result in a risk index level of 10. Here is what happens if you add the various numbers into a spreadsheet: 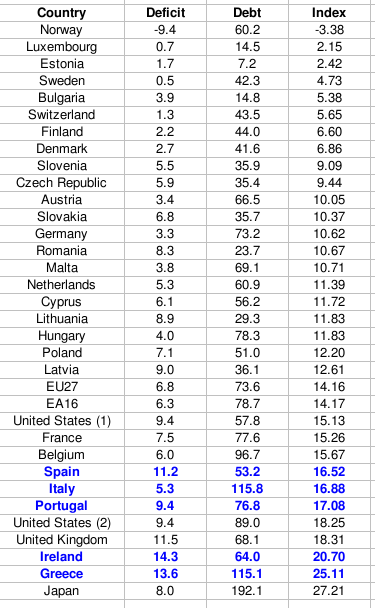 The PIIGS nations are there in bold blue, and it is quite obvious from their position on the chart that their risk of default is higher than most - Greece especially with a huge deficit added to a huge debt already incurred. What is surprising, though (but not to me), is the position of the United Kingdom and the United States. The markets have rightly savaged Ireland and Greece in recent months for their elevated risk levels, but any move to punish Spain, Italy and Portugal before the UK seems illogical. The UK has both a high level of debt and a high deficit which, when combined, is worse than Spain, Italy and Portugal.

I have put two figures in for the United States. United States (1) takes only public debt into account while United States (2) takes all government debt (including intragovernmental debt). You can see the two figures here. As I debated which version of US debt levels should be added, I read the fine print of the Eurostat report which indicated that the debt levels for the various European Union governments took into account total liabilities and not just money it owed to the public. As a result, United States (2) is the best figure in terms of comparison to the other nations on this list. Of course we can see that the US figures are just as bad as that of the UK.

What makes me doubt the effectiveness of this index is the situation with Japan. While Japan's government deficit is huge, only about 50% of it is owed to the public. Moreover, the Japanese economy enjoys large current account surpluses, which means that while the Japanese government has incurred a lot of debt, the Japanese private sector is very strong - and that needs to be added into the equation.

At this point in the business cycle and, taking into account the Global Financial Crisis, any index figure over 10 should be worrisome. So while the Eurozone (EA16) and European Union (EU27) are less risky than the US and the UK individually, how each nation and currency zone responds to the eventual recovery will be important. So while the numbers may look bad now, they will look very different in 4-5 years.