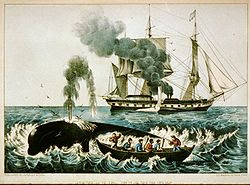 Save the Whales! Environmentalists for decades have been closely associated with this particular campaign and are directly responsible for the worldwide ban on commercial whaling in 1986. As a result of this ban, whale numbers around the globe have increased - though they are still a small fraction of the amount that existed in the 19th century and before.

Now, however, there is a proposal to allow Japan to have limited commercial whaling as a way to try to control and regulate the practice. Japan has, of course, been openly flouting international law by continuing to allow whaling for "scientific purposes", though it is clear that such practices are simply a front for commercial whaling - as proved by the presence of whale meat in Japanese restaurants and dinner tables.

Naturally such a proposal will result in an outcry - no! Whales are noble creatures! To use them for food and other commercial reasons is immoral! Allowing commercial whaling will cause the extinction of another of earth's animals! We cannot condone murder!

But the only way for people to adhere to such an argument is for them to be vegetarians, specifically vegetarians who believe that killing animals is murder. The vast majority of us - myself included - are happily omnivorous. Yet it is one thing to eat whale meat - it is another thing to do it and cause the death of a species. Chickens, cows and pigs have all died so that I and millions can enjoy our KFC bucket, our medium rare steak or our bacon and egg breakfast.

The problem is, though, that mainstream society is not vegetarian and is not likely to become vegetarian by choice. Poorer people around the world are vegetarian not by choice but by circumstance - but for us in rich, industrialised countries, we are happy to eat meat. The problem is that the environmental movement contains more than its fair share of vegetarians who morally oppose eating animals so that, if they get their way, no one would eat them. For carnivorous greenies like myself, that is a problem.

I've written previously about our coming vegetarian future, yet this situation will come about simply by necessity rather than choice: the limited space available for farmers to meet future demand will be dedicated to grains and legumes rather than livestock as the food energy output of the former is greater than the latter. Cows, pigs, sheep and chickens will still be used for food in the future - but they will be much more expensive than they are today.

Whales, of course, are no different to any other animal when it comes to consumption. If we can happily eat cows and pigs and fish, we can also happily eat whale. The difference, though, is that whales are endangered while cows and pigs are not. From this we can come to some sort of ethical conclusion which allows mankind to consume animals so long as we do not cause them inordinate suffering or wipe them out completely.

Such a conclusion is not outside the bounds of Christian teaching either. Christian blogger Byron Smith pointed out that Reformation hero John Calvin could be classed as a "greenie" for this teaching:

The earth was given to man, with this condition, that he should occupy himself in its cultivation... The custody of the garden was given in charge to Adam, to show that we possess the things which God has committed to our hands, on the condition that, being content with the frugal and moderate use of them, we should take care of what shall remain. Let him who possesses a field, so partake of its yearly fruits, that he may not suffer the ground to be injured by his negligence, but let him endeavor to hand it down to posterity as he received it, or even better cultivated. Let him so feed on its fruits, that he neither dissipates it by luxury, nor permits it to be marred or ruined by neglect. Moreover, that this economy, and this diligence, with respect to those good things which God has given us to enjoy, may flourish among us; let everyone regard himself as the steward of God in all things which he possesses. Then he will neither conduct himself dissolutely, nor corrupt by abuse those things which God requires to be preserved.

So the idea is then that even carnivores like yours truly (and you too most likely) have a responsibility to care for the earth that God has provided so that we can live, and that those who degrade the earth and make it worse for future generations are committing a very serious sin.

But let's get back to whales. For centuries mankind has sent fleets of ships into the oceans to hunt and kill whales to provide consumers with food and whale oil. Of course there's nothing wrong with utilising these resources - but what happened ended up bringing whales to the brink of extinction. Thanks to the 1986 ban (and to Star Trek IV), commercial whaling has been outlawed - excepting the Japanese and a few others - and whale numbers have begun to grow again. One notable example of this is the Blue Whale, which had dropped to maybe 650 individuals during the 1960s, but has increased to over 5000 today after a whaling ban in the 1960s (though still a fraction of the 275,000 Blue Whales estimated to have been alive before commercial whaling began). Population increases among other whale species has also been noted.

So with all this good news, why consider going back to whaling? The logic behind such a return is similar to that employed by advocates of drug legalisation - harm minimisation is more effective than criminalisation. In the case of whaling, the argument is that a heavily regulated return to commercial whaling is more likely to preserve whale numbers than the current ban. This is because the ban has created a demand for illegal whaling. Allowing a return to commercial whaling - which would be heavily limited by quotas - would reduce this demand and legitimise it. Moreover, quotas could increase as whale numbers increase, or decrease if numbers decrease, so long as the amount of whales killed by commercial whaling is much lower than the amount of whales that are born - preferably by a large percentage (eg 1 whale killed by commercial whaling for every 10 whales born). Linking quotas with whale population will ensure that commercial whaling companies have a financial interest in increasing the amount of whales in the ocean, thus giving them incentive to not hunt illegally (lest a complete ban be reinstated) and self-regulate.

The question is, though, have whale numbers increased to the point where even commercial whaling can be reinstated? While the 1986 ban has led to growing whale numbers, whale populations worldwide will still take centuries to recover from mankind's plunder. Depending upon the species of whale, a return to whaling - even heavily regulated by quotas - may still be unsustainable. While I certainly support a careful return to commercial whaling, my support is heavily qualified.

But all of this may be irrelevant anyway - experts are, after all, predicting an ocean die off once global warming goes too far. Maybe all I'm supporting is simply rearranging deck chairs on the Titanic. Time will tell.
Posted by One Salient Oversight at 20:06

Yes agreed I cannot understand this morality situation re whales. But then when I was a kid a visit to the cinema very often had a doco on whale hunters. South seas must have been full of factory ships. The British Labour Party tried to bring in whale meat but it seems the people did not like.

Obviously some Japanese like it - some also eat that fish that can poison you if not cooked properly.

This week I saw a headline that NZ was supporting a return to commercial whaling.

Iceland has a major whale kill every year. It is a culture thing there.

Would a return to commercial be a problem. Would people stick to quotas?

We watched the Makah Indians reintroduce whale hunting into their society a few years ago after decades of inactivity.

Nothing could be less harmful to whales. After two years: one whale was killed.

I say let them conduct their cultural activities.