I'm disappointed in you all. None of you has contacted me and asked me about my real interest rate statistical series. I mean, what am I doing, blogging for no reason? Why don't you all go and Well of course the reason for this oversight (ha ha I'm such a good comedian) is that I've been rejigging my methodology to take into account long term rates rather than short term ones - which was the problem with my previous series. Since I calculated using 10 year bond rates, every week was a new beginning or a new end for Greece or Ireland or whatever. So I've put the series into recess until I can produce something of quality that can actually mean something.

Anyway so here's something called a "Graph" that I made up. 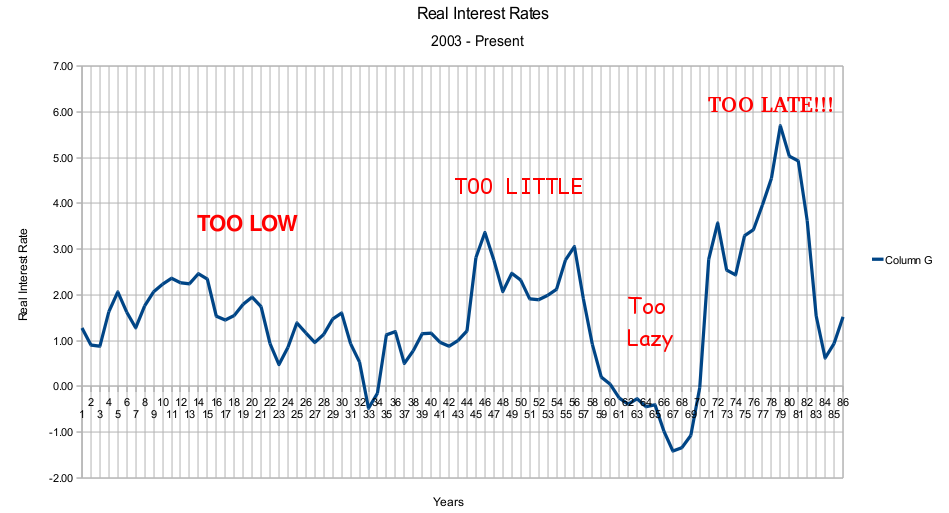 As you can see I'm hardly the spreadsheet maven. The X-axis is supposed to be dates from 2003-01-01 to 2010-02-01 and "column G" is supposed to read "Real Interest Rate". Nevertheless I was able to do a screenshot and then use The Gimp to graffiti some words onto it. They are:

Too Low: During this period of the US economy, real interest rates barely exceeded 2% and even dropped into negative territory. During this period, the US economy was simultaneously recovering from the dotcom crash and investing in the subprime market. It was during this period that the medium-term seeds of economic destruction were planted in the field of financial services and fertilized by the Fed... or something like that. Anyway this is the period I have repeatedly identified as the one in which the Fed under Greenspan basically lost its marbles.

Too Lazy: Like a kid lying on a couch in front of the television playing on his XBox, so too does Ben Bernanke completely ignore reality. Inflation has spiked up considerably and neither the Fed nor the market seems worried. Money sloshes around like bilge water in a ship sailing the wide accountant-sea. Halfway through this period was when Bear Sterns collapsed and then suddenly the market decided it wasn't happy any more. Comic Sans is, of course, the lazy font, which is why I use it.

Too Late: Economy collapses and financial armageddon hits, thus bringing us back once again to the point of no return. Bernanke and the Fed, reacting to the fire in the financial field, lowers rates but, alas, is too late: the field is burning down, the ship is sinking and the Xbox has frozen. Interest rates can't be lowered any lower because of some strange mathematical rule, which means that everybody is desperately saving. 10 Year bond rates drop to a low of 2.42% in January 2009 but deflation has set in, which increases real interest rates to 5.7% by July 2009. Naturally this is the time to use a bold serif font with exclamation marks to highlight the seriousness of it all.

Now the uptick at the end is where we are now. It remains to be seen where this uptick will lead. If we are going to have a double-dip recession then deflationary pressures are beginning to hit again (inflation was 2.78% in December, but 2.21% in February) and we can expect a further rise in that line. Sadly, the line is too near the zero mark as it is, which means that it could turn back into negative territory again - a move which would precipitate and encourage an economic drop later on.

Personally I think the Fed should keep real interest rates between 2-3% over the next twelve months to prevent either an inflationary boost or a deflationary (antonym of boost). Keeping real interest rates in the "middle" like that would result in stagnation which, of course, is probably the best we can hope for.
Posted by One Salient Oversight at 19:47