The Who - Who's Next 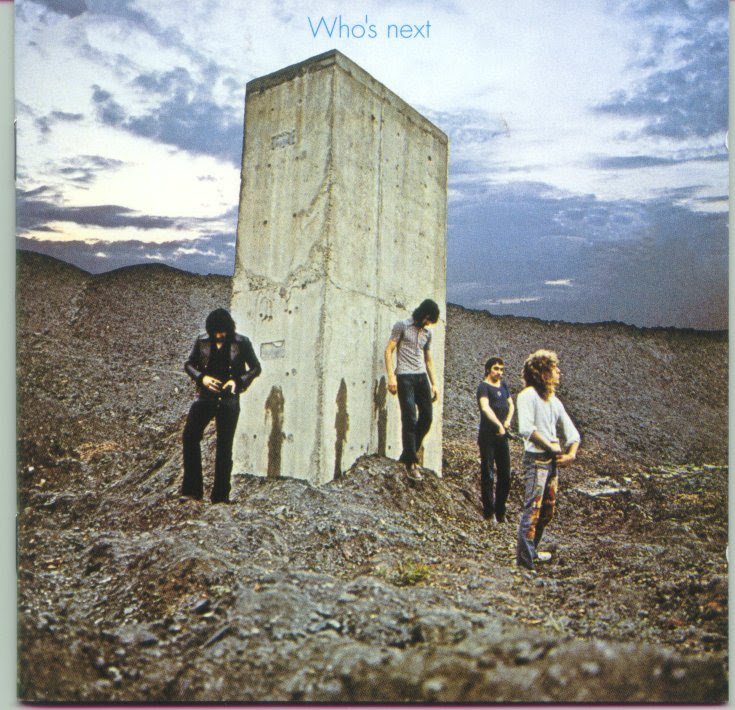 You have to hand it to The Who. In an age which worshipped guitar gods like Hendrix and Clapton, The Who produced a Rhinomegaloid guitarist whose speciality was to smash his hands against guitar strings in a "windmill fashion" - a process which involved shredding... of his fingers. The Who also produced the archetypical unconcerned and bored Bass player, the archetypical crazy drummer and the archetypical muscled blond looks of a Robert Plant lookalike. In short, the Who were neither popular pretty boys like the Beatles or dark and mysterious like the Rolling Stones. Instead they were, well, just ugly blokes who played energetic music (as opposed to Pink Floyd, who were ugly blokes playing progressive rock).

There's much we can thank The Who for in this album. Without this album we wouldn't have Baba O'Reilly synthesizing over our airwaves or David Caruso putting his glasses on while Roger Daltrey screams during "Won't Get Fooled Again" (one of my favourite songs ten years ago).

But just look at this cover. A seemingly abandoned freeway pillar aka monolith from 2001 stands upright in a barren landscape, its concrete vertical presence in stark contrast to the teenage wasteland around it. In 2001: A Space Odyssey, the monolith acted as a turning point in the evolutionary history of mankind: The apes discover the black monolith sent by the unseen aliens and learn to use tools and weapons; the astronauts discover a monolith buried in a crater in the moon, which sends a radio signal to Jupiter and to a gigantic portal that Dave Bowman enters and suddenly everyone begins tripping on LSD. But what are the members of The Who doing? What are those wet patches on the concrete monolith? Yes, the band urinated on it - see, they are even doing up their flies. Forget the question of why the band didn't just wee in hole somewhere and implicitly looked for a vertical object to pee against like the proverbial dog looking for a tree and instead delve into the symbolism of it all. Yes - the Who were implicitly telling the aliens, telling the future of mankind, that they not only refuse to evolve and better themselves but will actively fight against it. The symbolic act of urination is like a defiance of a potential future, as though the embrace of Rock and Roll would lead to a devolutionary human future which, of course, became reality when the Duran Duran started dominating the airwaves.

So the cover is, on the surface, a picture of four guys who've urinated against a concrete block and, below the surface and behind blue eyes, a defiant rejection of human progress.

Look at the poise of the four lads from Ireland. Bono, at the back, stares vacantly into the distance, probably at an industrial smoke stack and wonders how the feck they got it stay upright; Adam, at the front, carefully examining the inside of his blond fringe; Edge, on the right, staring daggers at the roadie chatting up some groupies behind the photographer; and Larry, the drummer, blaming you, the viewer, for his diarrhoea. In the background we have, well, some sort of boat, a dock, a bit of water, the side of a warehouse and a residential tower block in the distance.

If there is a phrase that describes this cover it would be "We haven't the time of money to indulge in anything artistic - I'll just get me camera and I'll take a picture of you all in that place where the garda found that dead body last week. And don't argue - I'm your manager and I know what I'm doing." Of course, like the ugly duckling that eventually grew up to be a deformed, genetically inferior swan, so too does this bland and amateurish album cover hide bland and unfocussed music within. 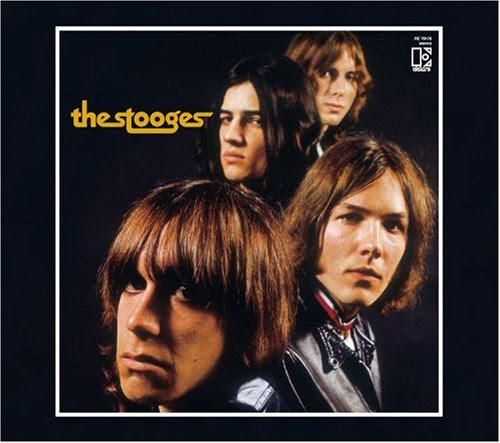 Without the Stooges the world wouldn't have had the Sex Pistols singing about their chronic lack of enjoyment. Within the album there are some classic songs about wanting to become someone's pet dog, about accidentally falling over, about the effects of cold changes on average temperature, about their unease of something or other, and of miniature toys for young girls (amongst others). The songs are actually pretty good ("We will fall" is actually a proto-post-punk song).

So when the band members got together to pose for the album cover, you can imagine what went through their minds, namely "Let's scare people into buying this album!'. Iggy is at the front, his mop wig covering his cranium like a Wermacht helmet yet not long enough to hide the contemptuous "I am going to vivisection you" look. Behind him and facing the opposite direction, is guitarist Ron Asheton, silently pleading with you to run, run, RUN before Iggy captures you while simultaneously expressing his own hopelessness at being trapped inside this evil band. Behind Asheton is Dave Alexander, whose cruel eyes indicate that he is Iggy's gimp, responsible for capturing and subduing you and having his own fun before handing things over to Iggy for the torture and eventual coup de grâce. Behind Alexander is drummer Scott Asheton, Ron's brother, whose crazed eyes and hint of a smile show that he will be the one who dances around, covered in your blood and entrails, once Iggy has had his way with you.
The Smashing Pumpkins - Mellon Collie and the Infinite Sadness

What is going on here? We have a zombie Elizabeth Bennet emerging from a transdimensional portal located in the centre of a flat gold star floating in a stylized solar system. What is she doing? Well as a Zombie Elizabeth Bennet she is undoubtedly looking for the handsome, rugged and financially secure brain of Mr Darcy, who, of course, represents D'arcy Wretzky, the female bass player of The Smashing Pumpkins. How did Billy Corgan manage to successfully bully the band members into creating such a travesty of an album cover? Simple, he paid them lots of money.

Mellon Collie is obviously a play on the word melancholy, which is quite depressing really. Infinite Sadness obviously means being sad forever, or at least being as sad as anyone can get. Yet despite all their wage the band is just a bat on a lathe because, after all, Elizabeth Bennet didn't end up infinitely sad after marrying Mr Darcy did she? Yet the Pumpkins and the fans became quite sad when Wretzky left, subverting Austen's work by replacing her with Melinda Auf der Maur, who put out more and turned the wholesome 19th century romantic tale into a sordid 1980s sex and violence video nasty involving the severed trunk of an undead woman flying around on stars. Thus the woman on the cover represents the feminine purity of Elizabeth Bennet whose relationship with Mr Darcy / D'arcy Wretzky has been severed, killing both the relationship and the band's creative output as Auf der Maur takes over. Think of replacing Liz and Mr Bennet's wedding scene with the music video of The Everlasting Gaze, except with more blood and more crying, and you will see what I mean.

But then again I could be wrong. I mean, a chick on gold star flying through space can mean an infinite amount of melancholy things. What it doesn't mean is a good album cover.

Posted by One Salient Oversight at 12:26

Boy, I did love Mellon Collie and the Infinite Sadness in college, though. But then I lost all respect for Billy when he started dating Jessica Simpson.

Back at blogging -- hope you'll come take a gander at the new stuff. :)

Hi
I have the best quality ring tone you can refer. Unique ringtone. Free ringtones. Ringtones from famous movies in the world. Many people around the world have installed ringtones for their mobile phones. How about you? Visit the home page below to get your favorite ringtone: https://bestringtonesfree.net/

I will introduce 5 most installed ringtones:

Thank you for your attention!

What phone are you using with default ringtone? Want to change? I have the best quality ringtone collection you can refer and leave a comment. The sound effects of my ringtone are of the best quality. Visit my homepage to find more ringtones and settings by following the instructions: https://iringtones.net/

Wish you have the best ringtone on your mobile phone. Free quality ringtones. Share to download your favorite ringtone. Thank you!