North Pole to melt in the next few months 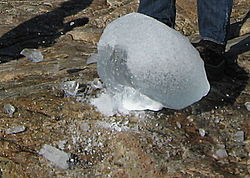 From the department of inconvenient events:

It seems unthinkable, but for the first time in human history, ice is on course to disappear entirely from the North Pole this year.

The disappearance of the Arctic sea ice, making it possible to reach the Pole sailing in a boat through open water, would be one of the most dramatic – and worrying – examples of the impact of global warming on the planet. Scientists say the ice at 90 degrees north may well have melted away by the summer.

"From the viewpoint of science, the North Pole is just another point on the globe, but symbolically it is hugely important. There is supposed to be ice at the North Pole, not open water," said Mark Serreze of the US National Snow and Ice Data Centre in Colorado.

If it happens, it raises the prospect of the Arctic nations being able to exploit the valuable oil and mineral deposits below these a bed which have until now been impossible to extract because of the thick sea ice above.

Seasoned polar scientists believe the chances of a totally ice free North Pole this summer are greater than 50:50 because the normally thick ice formed over many years at the Pole has been blown away and replaced by huge swathes of thinner ice formed over a single year.

This one-year ice is highly vulnerable to melting during the summer months and satellite data coming in over recent weeks shows that the rate of melting is faster than last year, when there was an all-time record loss of summer sea ice at the Arctic.

"The issue is that, for the first time that I am aware of, the North Pole is covered with extensive first-year ice – ice that formed last autumn and winter. I'd say it's even-odds whether the North Pole melts out," said Dr Serreze.

This is one of those times that I wish there was such a thing as global warming alarmism.

Just to clarify the facts - every summer the Polar ice cap goes through a melting process because the sun shines there 24 hours per day and because any liquid water there retains heat. In winter any liquid water freezes over and the whole pole goes through a cooling process. This whole cycle - of warming and freezing - creates sections of "temporary" ice at the pole.

The North pole does have permanent ice - ice that has not melted in a very long time. Normally, even during the summer, this permanent ice remains frozen.

Last year, however, large swathes of permanent ice melted. The northern summer of 2007 saw a melting of about one-third of the permanent ice. The 2007 melting also means that the North pole is half its 1979-2000 median size. This diagram should frighten the pants off anybody: 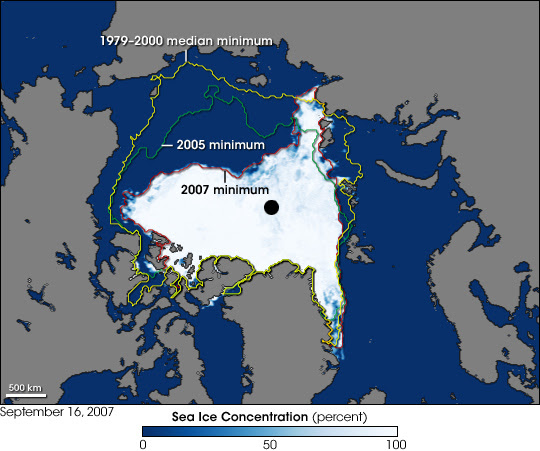 I'm not an alarmist - however I would say that if the polar ice cap did disappear completely during the 2008 summer then the dangers are immense. Since the ice floats on the top of the water on the North pole, its melting will not increase sea levels at all. However, Greenland's glaciers and Ice Sheets will begin to melt faster after being exposed to longer periods of liquid sea water. Already the sea is rising 2-3mm per year due to glacial melting from Greenland - a liquid North Pole would increase the rate at which this occurs.

And if Greenland melts, you might as well add 7 metres (23 feet) to the world's sea level.

UPDATE: Real climate weighs in on the issue, and doesn't deny that it is a problem.
Posted by One Salient Oversight at 19:55

"And if Greenland melts, you might as well add 7 metres (23 feet) to the world's sea level."

Your observations here are much needed. If and when Greenland melts those of us living more than 50 feet above sea level had better prepare for house guests! The humanitarian need will be the greatest in world history! I think it is high time for world and local leaders to stop debating the concept of climate change, and start preparing people for the worst. Who knows how much time we have left?

Why is Greenland melting faster?
There are many reasons such as those rivers digging their way through the ice, but in terms of the Arctic circle I thought the main theory was that Greenland's melt would increase because the heat in the seawater would increase without the North Pole ice cover. The Arctic ice acts as a giant mirror. Without that mirror the albedo changes. Albedo comes from "Albus", Latin for white. (Yes that means J.K. Rowling was effectively calling him 'Dumbledore the White'!) Without that giant mirror, less sunlight is reflected, and more heat is absorbed into those dark oceans. So the water that does hit Greenland is warmer, Greenland itself is warmer, everything at the top of the world is warmer without that massive mirror.

Reduction of the area of Arctic sea ice means less solar energy is reflected back into space, thus accelerating the reduction.[7]

Sea ice loss could cause more rapid warming of Northern latitudes, with effects on permafrost, methane release, and wildlife.[30]

On another matter...
This wiki on Arctic Sea Ice regrowth is important to keep in mind over the last fairly cold La-Nina year. (Summary: colder year, wide ice regrowth but extremely thin). Global warming is real, is happening, but appears INCREDIBLY complex and has to also interact with other strong forcings such as the Southern Oscillation Index.

What is worse than Greenland melting?
The sea level might not rise 1 meter this century — it's hard to say. But if Greenland did melt, that's 100 million people on the move looking for food, right? Didn't Al Gore say that was only one of the milder scenarios?

The worst case scenarios come from another direction and could be happening even faster, according to Lester Brown. That is glacial melt across central Asia. If that happens, 1 billion people — half in China, and the rest scattered across central Asia and India, will have trouble feeding themselves.

Glacial melt across central Asia is certainly a problem... however the problem with that theory is the assumption that people in Central Asia only get their water supplies from rivers fed by glacial melt.

It is entirely possible that the increased temperatures brought about by global warming may lead to higher amounts of moist air from the oceans heading in their direction which may cause orthographic rainfall. This would mean that their water would be sourced more from rainfall than glacial melt.

This would be enhanced if sea level rises caused the Don river in Russia to overflow into the Volga. This would lead to a filling of the Caspian Sea (which is below sea level and, if it rises, would be an event that displaces millions) and result in more regular convectional and frontal rainfall to the East and North-east of the Caspian sea.

It is, however, also possible that the entire region could end up being desertified as well, which is why Lester Brown's warnings should be heeded.

Actually forget that whole Caspian sea thing. I just checked and Volgograd - which is the nearest point between the Volga and the Don - is about 134 metres above sea level which means that the chances of a spillover are nigh on impossible.

Heavier rainfall over the Caspian that has its source from an enlarged Black Sea is, however, a possibility.

I used to be convinced that if we dug a channel into Lake Eyre that would permanently fix Australia's drought because of a similar rationale. What is it.. the whole basin is something like 1/6th of inland Australia?

Nope. Smarter dudes than me from the CSIRO modelled it and said they were not sure how big the increased evaporation would be, where the clouds would form and ultimately where the rain would actually fall.

Have you seen studies that mitigate the glacial melt problem with increased rainfall? Lester Brown never mentioned them. Global warming can lead to increased rainfall and more violent storms etc.. well, even the mechanisms of that are being debated but it makes a certain amount of sense. But my understanding was that increased rainfall was mainly negative? (Cyclones, storms, floods, etc...)

There'll be some winners from Global Warming for sure. Yet in case anyone thinks I'm a sceptic, isn't pointing that out like nodding at war-looters and saying, "See, what a marvellous and creative process war is!"