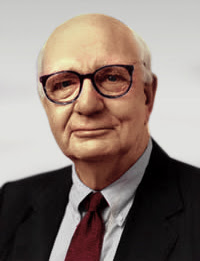 From the department of economic orthodoxy:

For those of you who are unfamiliar with (Paul) Volcker, he served as Fed Chairman from 1979 to 1987. Volcker came in when the US was experiencing the worst inflation since the Civil war and left when the Fed experienced the worst protests and political backlash since the Great Depression.

Simply put, Volcker kicked off a serious recession in order to slay inflation. From an objective standpoint, his decision made economic sense, but it was a political death knell. Volcker’s clearly aware of the fact, joking that the “greatest strategic error” in his life was not the recession, but taking his wife fly-fishing in Maine for their honeymoon.

And what is Volcker’s real concern? His old arch-nemesis, and the white elephant in the living room of the financial media, inflation.

The mainstream financial media has talked our heads off about “bottoms,” GDP growth, recessions and other news items. Amazingly, inflation, which is currently in the double digits (more on this later), hardly gets any mention. When it does, it’s the usual blather that it’s “better” or “worse than expected.”

A far more informative approach — and one that would be much more helpful to investors — would be to stop discussing inflation relative to expectations and start talking about inflation relative to reality. The Fed has changed its measure of inflation twice in the last 30 years; both times it chose to become more lenient. In fact, if you measured inflation today as you did when Volcker was Fed Chairman, you’d find inflation was in the double-digits. 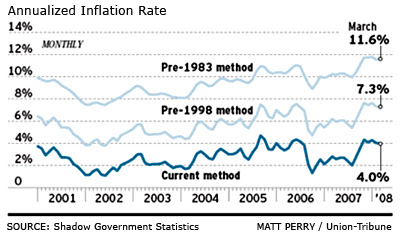 One of the more common themes running through the internets today is this idea that inflation is being "under reported". This implies two things. First, that things are worse than it appears. Second, that the newer methods of reporting inflation are somehow fatally flawed while the "older" ways are more accurate.

It's that second point I want to focus on - are newer methods of discerning inflation somehow worse than the old ones? If so, then the reason is either deliberate obfuscation (in other words there is a deliberate attempt to cover up bad news) or stupidity.

As much as I distrust certain elements of statistical gathering, I have to give the "new method" the benefit of the doubt. On the other hand, I do dislike the idea of removing food and petrol/gasoline from the mainstream CPI figures. The argument for their removal is that these two items tend to sway the CPI too much - my argument against is that the CPI should reflect as broad a measure as possible on price rises and should be the basis by which monetary policy is acted upon.

Nevertheless, if the above graph is correct (and I have no idea whether it is or not), it would be rather important to compare inflation levels now to when Volcker increased interest rates and the period before. According to the Minneapolis Fed, inflation peaked at 13.5% in 1980. A cursory comparison of inflation figures between 1974 and 1980 do show a remarkable similarity with the 2001-2008 inflation rate in the graph above when measured in the pre-1983 model.

Again, this assumes that the graph above is accurate and the methods they used to generate the data is identical to the pre-1983 inflation measuring method. If it is (and there would be reasons why not) then America is in a similar stagflationary environment to that experienced in the 1970s.

Which is all the more reason why another Volcker is needed at the Fed. The way Ben Bernanke is going, he might as well be another Arthur Burns. Removing Bernanke and replacing him with an inflation hawk with the courage to raise rates and do the right thing regardless of the public backlash is what is needed. This side of 20 January 2009, I can't see that happening.
Posted by One Salient Oversight at 09:59

What significance does the date 20 January 2009 have in regards to Bernanke? He is not a member of G. W. Bush's cabinet. His term is scheduled to expire on 1 Feb 2010.

It's the date beyond which he is more likely to be dismissed. With another President and an altered balance of power in congress, if Bernanke is deemed incompetent he could be removed from his position.

Would the president/congress remove him before that date? Unlikely.

Short of the Fed governors defenestrating him, it is unlikely he will leave before his term expires.

I suppose if all the governors let him know they had no confidence in him, he might quietly resign, but I think that is also highly unlikely. Congress will need someone to deflect the blame for the problems caused by their reckless spending, so I guess it is possible Ben might become a victim of Congress.

Of course, I do not wish for him to have to resign for reasons of ill health.