The really bizarre thing about the internet is that there are people out there who come up with ideas and points of view long before you or I do. For example, there is, already, a group of people who have said "Wow! Trent Reznor from Nine Inch Nails looks just like Severus Snape from Harry Potter":

Then there's the stuff you didn't know about until you discovered it, and laughed loud when you did, like the groups of people who like to draw Severus Snape pregnant:

Then there's the obligatory photoshop based on an exchange of consonants: 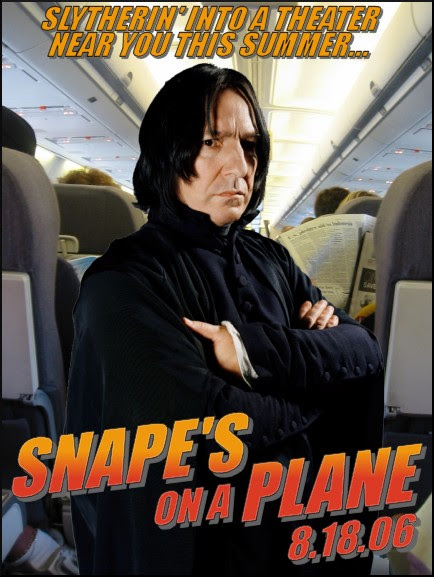 Why not draw Snape auditioning for Eurovision?

Why not other unmentionable things to the poor guy?

Or associate him romantically with other members of staff while invoking Fleetwood Mac?

Or mix Dali and Snape together?

Posted by One Salient Oversight at 12:05

I begged my sister to record Four Corners on Peak Oil and burn a DVD for me. (She had a cool Apple TV thing back then and I didn't. So there!)

So because she was doing that — and really didn't want to — she said, "OK David, but you have to go and see Snakes on a Plane" with me.


WARNING! SNAKES ON A PLANE SPOILERS! DO NOT READ BELOW IF YOU DON'T WANT YOUR PRECIOUS MOVIE WRECKED BY A SPOILER YOU WEIRDO! (To all those actually considering seeing this movie voluntarily).

Some bits of it were wrecked by Samuel L Jackson actually trying to act. The movie was so BAD that you didn't want him to try and actually mourn his partner when he dies. I felt like yelling, "What are you doing? Go and chop a few more snakes in half you dweeb, and stop the sadness! This is a comedy isn't it?"

And sure enough, with the grand finale of the over-sized African American Nintendo player landing the plane after 2 thousand hours Nintendo flight simulator, seated next to Samuel L.J. to land the plane, and on the flight tower's request for I.D. yelling "It's the brother with a brother from another mother!" you can be sure that it did not disappoint. B-grade "Who's gonna get it next?" all the way.

Now to the subject.

SNAPES on a plane is just so terrifying that I can't go there. Subject closed.