Worldwide food production: no collapse yet

This is a result of some number crunching I did, comparing the amount of cereal grains produced to world population level: 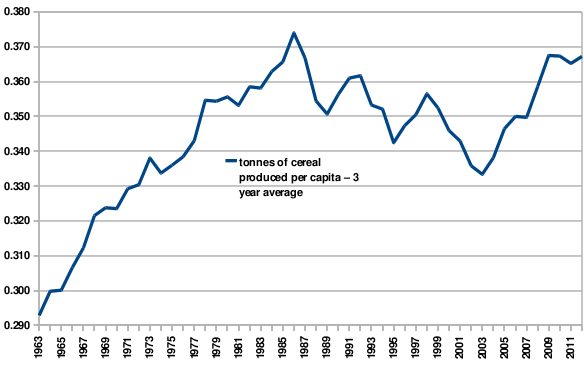 I chose a three year average because the original had huge yearly swings while this gives a reasonably good idea of where things have been heading. It also takes into consideration the fact that cereals can be stored over the long term, which means that high production one year can help service demand the following year.

I chose cereal grains since these are a staple food and indicates generally the potential for future famines (as production decreases).

What it shows is that, so far, there have been no significant negative impacts on world food production in the past 50 years. There was a marked decline between 1985 and 2003 that needs to be explained, but production since 2003 has risen quickly.

The reason for looking at per capita figures (tonnes of grain produced divided by world population) is to see whether or not production levels are exceeding population: It's all well and good for cereal production to increase but it is another thing altogether if population is increasing faster than cereal production.

I created this spreadsheet and graph to see whether or not Peak Oil and Global Warming had affected global food production. So far the answer is that they haven't yet.

A few years ago there were various food riots around the world tied to increasing prices. See here and here. It seems that, in hindsight, these problems were probably a result of local issues arising out of the Global Financial Crisis.

It's also true that grain prices have increased and this is due to increased demand from developing countries like China. Notwithstanding these facts and the consequences of them (richer people increasingly consuming more of the available food than poorer people) worldwide cereal production is still better now than at probably any other time in history.