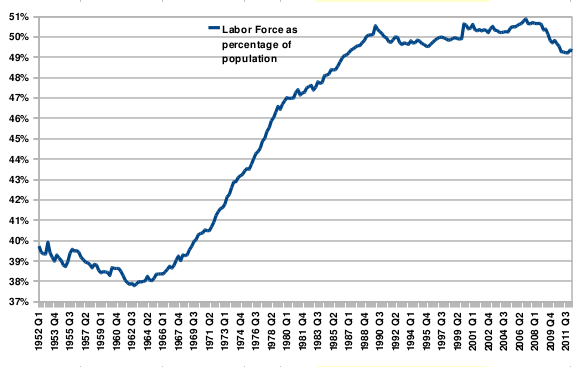 This is a different metric to, say, the Labor force Participation Rate.

Although there has been a marked decrease in recent years, the most salient part of this graph has to be the 1962-1990 growth period, whereby large amounts of people entered the workforce. This reflects the growth of women choosing to work in the workplace rather than remaining at home. I'm sure that birthrates during this period would also reflect a downward trend.

And although productivity is certainly a important feature in GDP growth, this graph should also prove that GDP growth between the 1962-1990 period was also driven by an expansion of the available workforce. Similarly, any discussion about how GDP growth in recent decades has been lower than the previous ones should also take into account the plateau from 1990 onwards.

The 1952-1962 period is interesting in that the population grew faster in proportion to the workforce. In a word: Baby Boomers. By 1962, the eldest Baby Boomers were 17 and ready to go to work.

The post 1990 period corresponds with the tech boom, the housing boom and the GFC.

As the population ages and more people retire, there will be a fall in the above graph. I'd love to look at a graph for Japan, considering their population is aging and now in decline.