Two recent events have rocked the world of a couple of internet denizens.

The first is David C. Simon, the creator of the webcomic Crimson Dark. Simon, a talented user of computer graphics and scriptwriting, has been nabbed by the Game company that is producing "Star Wars: The Old Republic". Simon's role will be mainly in writing, but there's no doubt that his skills in creating Crimson Dark were an important part of this process.

The second is that a Redditor named Prufrock451 with a good script idea is now in talks with a Hollywood company. While this is early days yet, it is the culmination of a very quick few weeks in which the Redditor began writing a sci fi/fantasy story in which a Marine battalion in Afghanistan is transported back in time to ancient Rome. The story, called Rome Sweet Rome, started off mere weeks ago as an experiment in writing that somehow gained a huge following amongst Redditors. Just the mere idea of Machineguns mowing down Praetorian Guards got people involved, not just in reading but also in editing. I suppose you could call it a Saw and Sandal epic (see here). 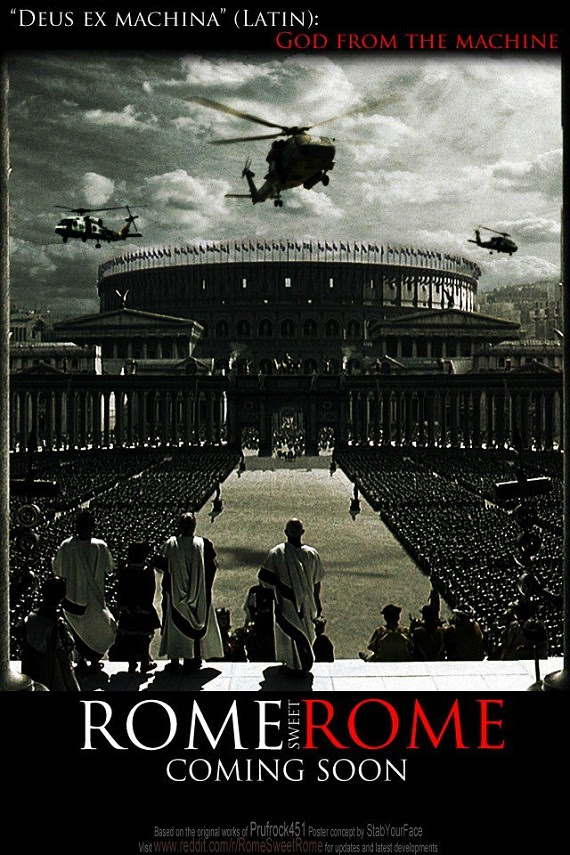 Posted by One Salient Oversight at 12:45

Reminds me of Kirk Douglas and The Final Countdown (1980 with the carrier transported back to 1941 Pearl Harbour meeting the Japanese fleet and the immortal line "Splash the Zeros" not combat just take em out.... And of course Kirk had a good go against the Legions in Spartacus

So how does Logistics go in this Marines vs the Legions? How long does ammo last? I read that Apache choppers etc used more fuel in 2003 War than the whole air force in WW2?
Maybe the Marines reinvent the Long Bow and Cross Bow that should fix the Romans - hit them before the dreaded Javelin throw....

Oh and reminds me of just post WW2 Eagle comic and Dan Dare the Earth Army goes off to enemy planet but a force field stops bullets so it good old hand to hand........