I concur with Rebecca

Rebecca Wilder at Angry Bear has pointed out that there is a large divergence between unemployment rates in the Eurozone.

Since I am a defender of the Eurozone I leaped at the chance to prove her wrong with data, which did not happen. I'm not going to post huge graphs here but I will post something directly from a spreadsheet.

Anyway, here's what my spreadsheet told me about November 2010 Eurozone unemployment statistics: 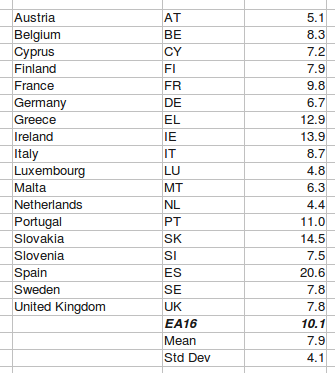 And here is a breakdown of the November 2010 unemployment figures for each US state (sorry for small font size):

The standard deviation of the Eurozone, 4.1, is nearly double that of the States of the US, 2.1. That indicates unemployment in the European Union is certainly diverging wildly, as is Rebecca's argument. Interestingly, median unemployment in the Eurozone (7.9%) is lower than the US (8.6%), but such a result needs to take into account equal weighting given to smaller states or nations like Alaska, Wyoming, Malta and Luxembourg.
Posted by One Salient Oversight at 13:55