Q2 2010 European GDP grows faster than the US

I predicted this about 2 months ago.

Here's what the Eurostat release says:

GDP increased by 1.0% in both the euro area (EA16) and the EU27 during the second quarter of 2010, compared with the previous quarter, according to flash estimates published by Eurostat, the statistical office of the European Union. In the first quarter of 2010, growth rates were +0.2% in both zones.

Compared with the same quarter of the previous year, seasonally adjusted GDP increased by 1.7% in both the euro area and the EU27 in the second quarter of 2010, after +0.6% and +0.5% respectively in the previous quarter.

Actually I love it how people like to report GDP figures differently. 1.0% doesn't sound too much and anyone who read the latest US GDP figures would say "But US GDP grew by 2.4%". Here's two examples:

Gross domestic product grew at a 2.4 percent annual pace, less than forecast, after a 3.7 percent first-quarter gain that was larger than previously estimated, according to Commerce Department data issued today in Washington.

Gross domestic product in the 16-nation euro area increased 1 percent from the first quarter, when it rose 0.2 percent, the European Union’s statistics office in Luxembourg said today. That’s the fastest in four years and the first time the euro region has outpaced the U.S. since the second quarter of 2009.

As anyone who has been trying to decipher GDP reporting over the years knows, there are three (and possibly four) basic ways to measure GDP growth:
Confusing isn't it? The thing is, when the media reports US figures, it gives the 2nd measurement; when they report EU figures, they use the first measurement. What ends up happening is that the US looks "better". So how do the US and EU really compare? 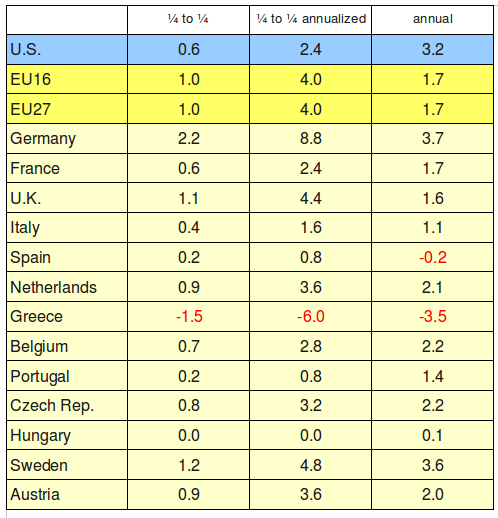 Of course the recovery has hit Europe one quarter after it has hit the US, which is why the annual figure for the US exceeds that of the EU. Q3 2010 should look interesting, as should further revisions of these GDP numbers for both Europe and the US.
Posted by One Salient Oversight at 21:13