US Foreign Debt as % of GDP 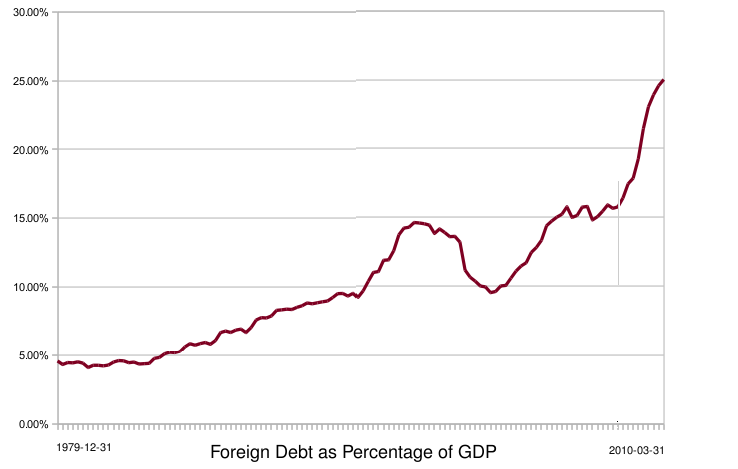 Sources:
Posted by One Salient Oversight at 12:40

Also, you're using the wrong measure of the national debt. You've shown debt held by int'l investors as a % of gross debt, which is probably around $13T now. But every monetary economics textbook will tell you that the appropriate measure is the debt held by private investors, which subtracts both trust funds (internally held debt) and debt held by the Fed to get a total probably a bit less than $8T now. That's the only debt that actually needs to be serviced and that's the only debt that it is even legally possible of defaulting on.

FDHBFIN is definitely US treasuries held by foreigners. It depends upon your definition. I was never under the impression that this was foreign currency debt owed by America.

As for your second point, I assume you are referring to the other post about debt/GDP ratio. FYGFDPUN is public debt, not gross debt. If you check the figures you'll see that the data I use is the smaller figure. ie I used the debt figure you said I should use.

No I haven't. I've shown it as a percentage of GDP.

Regarding "foreign debt," that is usually taken to mean denominated in foreign currency. "Held by foreign investors" is not. Those are just standard usages of the terms.