US Dollar history since 1999 and some predictions

This is a graph of the US Dollar Index since 1999. 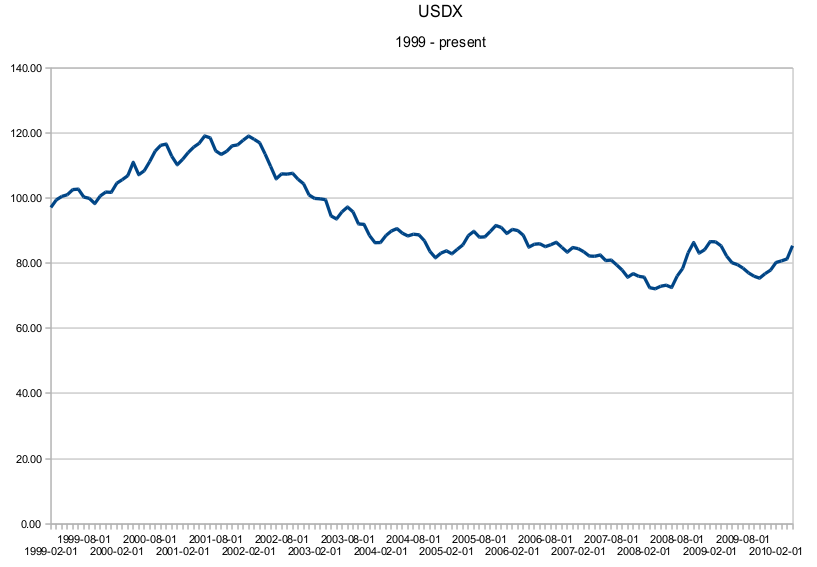 Annoyingly, the St Louis Fed "FRED" online tool does not have a USDX graph to check, so I had to add in all the different currency values onto a spreadsheet and then apply all the various weightings. This graph begins in 1999 because the Euro was not around before then and, while I'm sure there are equations and whatnot to cover this change, I haven't found them yet!

But as you can see the US Dollar reached its peak at around the same time as the dotcom boom went bust in 2000-2001. It fell steadily to around 2005, when it regained value somewhat and then fell further until early 2008. Of course the steep rise in mid-late 2008 was due to the effects of the credit crunch and a small plateau of sorts developed before further devaluation began and lasted until November 2009, when it began to rise again. The figure for May 2010 was 85.33.

At the moment, consumer prices in the US have declined for two months and the effect of the Obama stimulus plan has begun to wear off, which means that we are heading for a more muted economic performance. I think GDP in Q2 2010 will be very low and I am expecting at least one quarter of negative growth this year. At best we'll see some further deflation and at worst a second credit crunch to rival Q4 2008, which means that investors are probably going to push the Dollar up again as they run away from stocks - a process which has already begun if you look at the far right hand side of the graph.

The only fly in this predictive ointment is European GDP growth in Q2 2010. I believe that EU growth will be higher than US growth during this period and investors will be surprised by European economic strength - to the point where yields on PIIGS bonds will drop. How long this will last I don't know, but monetary conditions in Europe in the last three months have certainly been very strongly inflationary (Switzerland will head them all, whilst Greece will be reasonably poor) whereas monetary conditions in the US have more or less been neutral (and tending deflationary).
Posted by One Salient Oversight at 16:41