Random thoughts on our vegetarian future 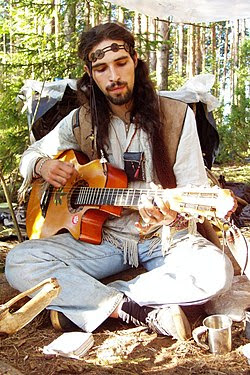 One of the strategies seen by climate futurists (ie those who believe in global warming and who are offering possible solutions) to save mankind is for the world to become more vegetarian. Unfortunately this has been derided (mainly by climate sceptics) for being, well, too lefty and radical.

What I can predict, however, is that even if nothing gets done currently, the future will be vegetarian - there will be no choice. And the reason for this is not due to smarmy governments relenting to PETA, but market forces.

Let's say that in 20 years time, climate change is impacting food production worldwide. Changes in rainfall because of global warming have resulted in less rain falling in breadbaskets and more rain falling on areas not used much for farming.

So with a drop in food supply comes the natural market response - an increase in prices. And it is not just one particular foodstuff but all that are affected. So the price of grains, vegetables, dairy and meat goes up.

Of these the most expensive is meat, which means that the market would respond to higher meat prices by dropping its demand. In its place would come an increased demand for meat substitutes, which are essentially protein based crops such as lentils, chickpeas and soy beans (to mention just three).

One main reason for this occurring is that the farming of grains and legumes produces more joules of food energy per square metre than your standard cattle station (or non-cattle equivalent). It would therefore make economic sense for farmers to shift their farms from meat production to grain or legume production. With this under way, farms would then be able to produce more food energy to meet the sky rocketing demand.

Of course this change will not come overnight, and nor will the change be the same throughout the world. The world's farmers are not suddenly going to kill their cattle and grow lentils. Instead, it will be a gradual process and there will still be meat producing areas around the world catering for the richer nations.

Unfortunately it will be the poorer nations that will suffer the most during this switch-over, as they are the least likely to be able to cope with a change in crops, less grain production in drought affected areas, and the technology and know how to take advantage of changing conditions. Expect famine in other words.

Posted by One Salient Oversight at 19:57

Poms have been eating sausages for years. My fav "Yes Minister" was Jim in a Churhillian speech defending the British sausage against an EU plot to put more meat in them.

India is already very vegetarian. China well you can feed chooks on veggie scraps so I would say chickens will be available in village farming communities and pigs are great rummaging around

My diet is limited to only eating animals that are vegetarians.

When pressured by a vegetarian a number of years ago to accept the truth and give up my unhealthy carnivorous ways, I told her that her arguments made a lot of sense, but there was only one thing keeping me from becoming a vegetarian.

She did not think that was funny.

Beamer,
Pigs eat lots of corn and meal and all sorts of vegetables, and then we eat the pig. Pigs are merely condensed vegetables!