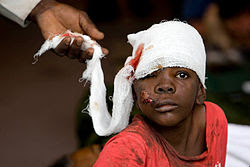 Haiti has charged 10 US missionaries with child abduction and criminal conspiracy for allegedly trying to smuggle 33 children out of the country.

Haitian officials said their cases would now be sent to an investigating judge who would decide how to proceed.

When stopped on the border last Friday, they said they were taking the children to a Dominican Republic orphanage.

But it has emerged some of the youngsters had parents who were alive.

Hanlon's Razor says Never attribute to malice that which can be adequately explained by stupidity and I think that is what is going on here. I'm not saying that it's impossible that these missionaries were deliberately stealing children out of Haiti - of course it is - it's just that in this case I don't think their actions were malicious. Misguided? Yes. Stupid? Yes. Embarrassing? Yes. Deliberately evil? No.

When faced with a disaster of the scale of the recent Haiti earthquake, and also faced with advertisements pleading for charity, many people (including Christians) can feel somewhat disempowered. Although their concerns can be assuaged somewhat by giving away money, some have decided on more direct action - especially when there are reports of charity money never actually reaching those who need it most.

So I think this is what happened: A bunch of US Christians from a missionary agency decided on direct action to save and help the lives of a small amount of Haitian children. They flew to the Dominican Republic (the nation which occupies the Eastern half of Hispaniola, while Haiti occupies the Western half), organised some slapdash accommodation, then set off in a bus across the border where, upon reaching Port-au-Prince, they picked up 33 kids who they deemed to be orphans, and then headed east to bring these children to freedom and a better life.

Of course what happened then was that Haitian authorities stopped the bus before it crossed the border, took away the children - some of whom were then reunited with family, including parents, in Port-au-Prince - and arrested the missionaries.

Obviously time well tell whether these missionaries were child trafficking, but I think it is safer to assume that these were well meaning people who committed a seriously stupid act.

Posted by One Salient Oversight at 09:01

People going into such activities should be aware that taking children away from their parents and siblings and relatives and culture is not a good idea. When I was involved in children's homes in India we were asked about adoption - a quick talk with a local doctor convinced me not a good idea.

Taking help into Haiti would be good. But deciding on who are orphans etc and removing them from their own country without local authorities being involved is not a path to tread