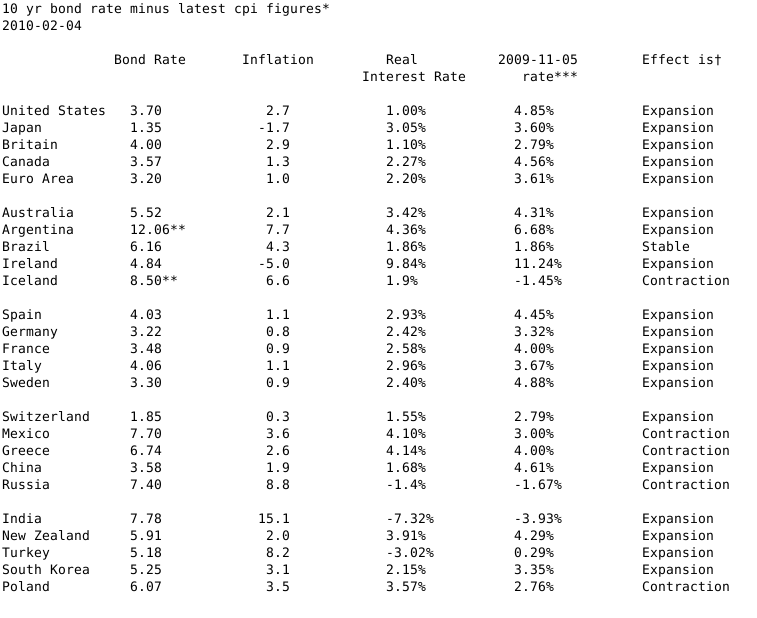 Monetary conditions in the United States have now eased to the point that, by one measurement, real interest rates are now negative. As I pointed out just after Christmas, the speed at which real interest rates have plummeted in the United States indicates both an increase in 2009 Q4 GDP for that quarter (I predicted +3%, but preliminary figures showed an increase of 5.7%) and the beginnings of a dangerous inflationary environment in the near future. This means that 2010 in America is due for higher inflation and higher interest rates. the question is - how much will economic growth be impacted by the Fed's increase in rates (or maybe even it's desire to ignore growing inflation)? I don't think the global financial crisis is over yet by a long shot, and Q4 performance is not indicative of what is in store for 2010. Unemployment in January 2010 dropped, which indicates that growth in January has continued at the very least. My prediction is that at least one quarter of 2010 will be negative growth. 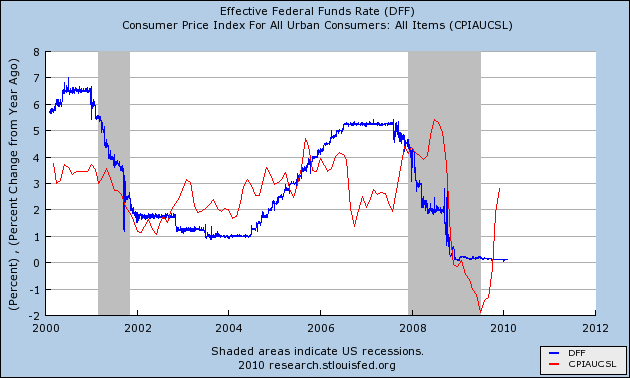 According to this measurement, the US is currently experiencing negative real interest rates (using the effective federal funds rate as a benchmark rather than 10 year bonds). Negative interest rates can also be seen between 2002 and 2006 - the exact period which created the bubble environment that helped caused the crisis in the first place. This measurement indicates that Real Interest Rates in the US (based upon the Federal Funds Rate, rather than Ten year bonds as per my measurements) are around negative 2.7 percent.

Here's the data (courtesy St Louis Fed) and the equations:

Monetary conditions in Ireland have eased somewhat in the last three months, with real rates dropping from 11.24% to 9.84%. Nevertheless, the rate is still exceptionally high, due to the combination of high bond rates (compared to other nations in the Eurozone) and substantial deflation. Ireland is hardly "out of the woods" yet, but it seems likely the worst may be over. An austerity budget plus being part of the Eurozone means that Ireland's recovery is dependent solely upon an increase in Eurozone demand for its future economic growth.

Australia's monetary conditions have also eased in the last three months, though nowhere near as much as other nations. Australia's Reserve Bank has stopped raising interest rates for now, but contractionary monetary policy is likely to be maintain into 2010. GDP growth for 2009 Q4 should be broadly positive.

Recent market activity regarding Greece has raised bond levels to the highest in the Eurozone. This means monetary conditions in Greece have become contractionary. Greek GDP for 2009 Q4 should be low but I expect 2010 Q1 GDP levels to be negative.

Iceland has finally emerged from its negative interest rate environment but this will be accompanied by a continual drop in GDP and a rise in unemployment.

Real Interest Rates in India have plummeted from -3.93% to -7.32% in the last three months. This is due to a burst in inflation. Economic conditions in India are not served well by having substantial negative interest rates, and an increase in rates to control inflation is likely.

Euro Area interest rates have dropped in the last three months, indicating that GDP increase is likely, along with a drop in unemployment. Unlike the United States, interest rates in the Eurozone are still positive, which means that growth is more likely to be lower than that of the US, yet more sustainable since investment bubbles and inflation are less likely to occur in economies with positive real interest rates.

Germany has the lowest real interest rate of any nation in the Eurozone, which should help boost domestic demand (a good thing for an export-dependent country suffering from the global financial crisis)

Posted by One Salient Oversight at 14:19

I don't know if other countries measure unemployment in the same way as the US, but the quirky way we do measure it makes it difficult to determine whether or not the job market is improving.

I believe not. The Wall Street Journal today reported: The Labor Department's annual revisions showed that employment in December was nearly 1.4 million lower than previously reported.

It continued with this: The number of people working part-time, even though they want full-time jobs, fell sharply. That usually happens when employers are starting to add full-time workers and look to the ranks of part-timers already on their payrolls for good candidates. And a broader measure of unemployment, including those who want to work but have stopped looking, declined to 16.5%, down from 17.3% in December.

That is better than an increase, but one month does not a trend make. I don't believe we have reached the trough yet.

There's actually quite a lot of commonality between nations in terms of unemployment stats.

But you're right, the drop to 9.7% has a lot of footnotes added to it that make it less rosy than the numbers indicate.

The "Broad Measure" you're referring to is U-6. I download the unemployment stats almost as soon as they come out and that is the first thing I tend to check as it is the measure they used back during the depression when unemployment reached 20% and more.

I give this particular stat a bit more weight than you do. A drop of 30 basis points (10.0 to 9.7) is not large but it's not small either. It's a bit of a trough at the moment... though I'm not exactly confident that unemployment will continue to drop through the year.