The Anomaly of George H.W. Bush 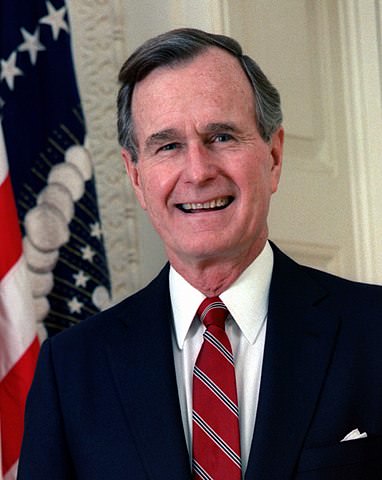 The recently deceased former president George H.W. Bush will not go down in history as one of America's greatest presidents, but he will probably be remembered as a good president, and certainly the least controversial president of the post-war era.

If you go through a list of all the presidents after Roosevelt, every single one has a serious black mark against his name, deserved or undeserved. All except GHW Bush.

It's not as though GHW Bush was perfect. He wasn't. He could've done a whole lot better than he did, and he did some bad stuff too.

Truman - The use of Atomic Bombs against Japan.

Eisenhower - CIA coups in various parts of the world that propped up authoritarian regimes.

GHW Bush was president in a transitional period of history. Communism and the Iron Curtain collapsed under his watch, an event that America did not expect and did not adequately exploit. It was also a transitional time for US politics too, with the growing demise of Rockefeller Republicans, of which Bush was one. Bush helped set up NAFTA, a trade agreement that upset a number of economic nationalists and which created a spoiler candidate for him in 1992 in the form of Ross Perot. Had Perot not run as an independent, Bush probably would've got enough votes to beat Clinton. Economically, Bush was against the Supply-Side "Voodoo Economics" that became policy under Reagan, forcing him to raise taxes to address the out of control budget deficit that had been bequeathed to him by Reagan. The decision to raise taxes rather than cut spending was an indicator of his centrist position, but he had made the mistake of initially promising "no new taxes", a policy reversal which further alienated the growing minarchist base of the Republican party.

The greatest event during his presidency was the Gulf War. With the Cold War barely over, Saddam Hussein's decision to invade Kuwait created a potential economic and humanitarian crisis. With the United Nations as a global institution still respected by Washington, Bush and other world leaders skillfully navigated diplomatic channels in an attempt to end the crisis while simultaneously preparing for war. With Saddam unmoved, the Western powers engaged in the largest military conflict since the Vietnam War. The overwhelming victory not only solidified America's place as sole military superpower, but also justified the idea of an all-volunteer military, a process which had begun in Western militaries soon after the Vietnam War finished.

In hindsight, would it have been better if the US had gone on to invade Iraq? The Iraqi military was in chaos and Saddam's grip on power loosened. Yet the post-2003 years showed just how difficult such a process would be. Nevertheless, a 1993 occupation of Iraq with the backing of the United Nations and the keen involvement of all western powers could have arguably produced a better outcome than the 2003 occupation, not least because by 2003 a combination of arrogance and incompetence had begun to typify high-level government leaders under GW Bush, a process which came to a head in 2005 with Hurricane Katrina, and which was also seen by the increasing civil war in Iraq. At least in 1993, such a combination of arrogance and incompetence was not yet noticeable (perhaps due to GHW Bush's many years in public service, including being head of the CIA).

George HW Bush's pardoning of those involved in the Iran-Contra scandal is obviously an issue. The scandal, hatched under Reagan, should have been exposed and the top people involved punished. Bush probably knew about the plan - being the Vice President under Reagan and a former head of the CIA. It's a scandal that didn't reverberate as much as it should have, and modern day American conservatism has been too quick to forget and ignore the near-treason involved in it, with feel-good nostalgia and victory over communism (a modern myth) being their memories of Reagan.

So of course GHW Bush was not a perfect president. No president is. And yet when we look through the turmoil of postwar history we see in GHW Bush as someone who managed to avoid controversies. And just as we wonder what would've happened had Gore or Hilary Clinton had become president had not circumstances intervened, so too can we wonder what would've happened had Perot not spoiled the 1992 election. Would there have been a 1994 Republican revolution with Bush in power? Who would've contested the 1996 election? Who would've been in power on 9/11? GW Bush's run for the presidency could've been delayed had his father served a second term.


Posted by One Salient Oversight at 11:36