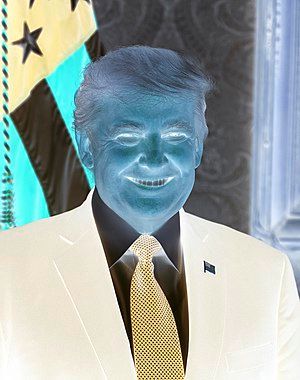 In the last few weeks, more and more evidence has piled up against Donald Trump's actions in the lead up to the 2016 presidential election. Campaign finance law breaches and communication with the Russian government mean that he committed serious felonies. The evidence from the US Justice Department indicates that he should be impeached and removed from office.

But is that going to happen? Despite all the evidence of 2017 and 2018 the Republicans in Congress have defended their president. It was impossible for the Democrats to win a two-thirds majority in the senate at the recent mid-term elections. In order for Trump to be impeached and removed, a simple majority vote in the House needs to be passed in order for impeachment, and a two-thirds majority in the Senate is needed to remove the president from office.

Impeachment from the house is a simple matter, but it won't make much difference if the senate doesn't remove him. So the senate is the battleground. 45 Democrats and 2 independents need 20 out the 53 Republicans to vote with them. This is unlikely to work.

But if it could work - if there are enough Republicans who are convinced of Trump's guilt - what would be the necessary compromises made between the two parties to agree to it?

1. Mike Pence should resign or also be impeached.

Although Mike Pence has not been linked to anything substantial, the fact remains that he is closely associated with Trump. This association is intolerable. If Trump is removed from office, Pence should not replace him. He should either be impeached and removed at the same time as Trump, or else he should resign prior to Trump's removal.

2. Nancy Pelosi should refuse to serve as President.

In the presidential line of succession, the House Speaker is next in line after the Vice President. In 2019 this person will be Nancy Pelosi. Pelosi has been a committed Democrat in the US Senate for many years, and while many Democrats would welcome a Pelosi presidency, it would not be something acceptable to Republicans. As part of any potential agreement between the two parties, the ascending of a well known Democratic party leader to the White House could not work.

3. Orrin Hatch should not be selected to serve as President.

Next in line in the presidential line of succession is the "President Pro Tempore" of the US Senate. This is Orrin Hatch. Hatch, like Pelosi, is a well known Republican party leader. At 84 years of age, he is the third eldest person in the Senate and has shown himself to be an ardent Trump supporter. He should not be selected either.

In order for the removal of Trump to work, his replacement must be a Republican. Ideally this person should be younger than 50 and should hold a moderately conservative position, as opposed to the more radical tea-party ideologues. Members of the "Republican Main Street Partnership" should be the ones most likely to fit this bill. In the Senate, this would include Todd Young, the 47-year old junior senator from Indiana. For the House, moderate Republican under 50s include: Rodney Davis, Sean Duffy, Brian Fitzpatrick, Mike Gallagher, Jaime Herrera Beutler, Will Hurd, Adam Kinzinger, Brian Mast, Tom Reed, Elise Stefanik, David Valadao and Lee Zeldin.

5. Place this Republican candidate in a formal leadership position.

This would be, in the case of Todd Young, his appointment to President Pro Tempore of the Senate, replacing Orrin Hatch. In the case of the house Republicans, this would involve them being appointed to the position of House Speaker, replacing Nancy Pelosi. These positions would be titular only, and would only last as long as it takes for the president and vice president to be removed.

6. Impeach and remove Donald Trump, and Mike Pence if necessary.

With a young, moderate Republican now firmly holding a position in the presidential line of succession, Trump can be removed from office. With Pence gone as well, this Republican will then be in a position to be appointed to the position of president.

7. The Republican President nominates a Democratic or Independent Vice President.

Unity is important in this day and age. With a Republican president replacing Trump, the chances of social upheaval and violence are lessened. By appointing a Vice President who is a Democrat or an Independent, the president will be publicly showing the importance of bipartisanship and unity.

8. Neither President or Vice President will stand for re-election in 2020.

One important step to make this work would be the insistence that neither the newly appointed Republican president nor his non-Republican Vice President should be running for the presidency in 2020. By refusing to run, these two people would focus more upon the process of executive power wielded and effective government, rather than upon their own personal ambition to be elected to their position.

9. Donald Trump is not pardoned.

The final part of this jigsaw must be the assurance that the new president does not pardon Trump. Although it is likely that Trump might be indicted on state charges, and thus not be able to be pardoned anyway, the action of pardoning Trump would create a huge distrust in the process of government.
Posted by One Salient Oversight at 13:29