I've just had a very important change in thinking. I'm no longer going to focus on the Consumer Price Index (CPI) as the main measurement of inflation, but the GDP Deflator.

When Gross Domestic Product (GDP) is reported, two figures are released. The first is called "Nominal GDP" and is essentially the latest measurement in current prices. Since prices are affected by inflation, a second figure is released called "Real GDP", which measures GDP after adjusting for inflation. A mix up in my understanding of this issue was quite embarrassing a few years ago, but it has remained in the back of my mind ever since.

The thing is that CPI measures consumer prices. It doesn't measure producer prices (which is a separate figure) or any other price movements. In my macro study of how inflation affects the money supply I searched for a more accurate representation of how inflation should be measured. The GDP deflator is the broadest measurement of inflation in an economy. If you want to measure the complete price change in the economy, look at the GDP deflator.

Firstly, this has had broad implications with my recession predictions. The spreadsheets I have on this issue more than confirm my predictions when I replace CPI data with GDP deflator data.

Secondly, it has changed my opinion of what is going on in Japan. As someone who believes in Absolute Price Stability (neither inflation nor deflation over the course of the business cycle, with an inflation index averaging out at zero changes over the long term) I have often lauded Japan as being an example of what it could be like. Not any more. See here: 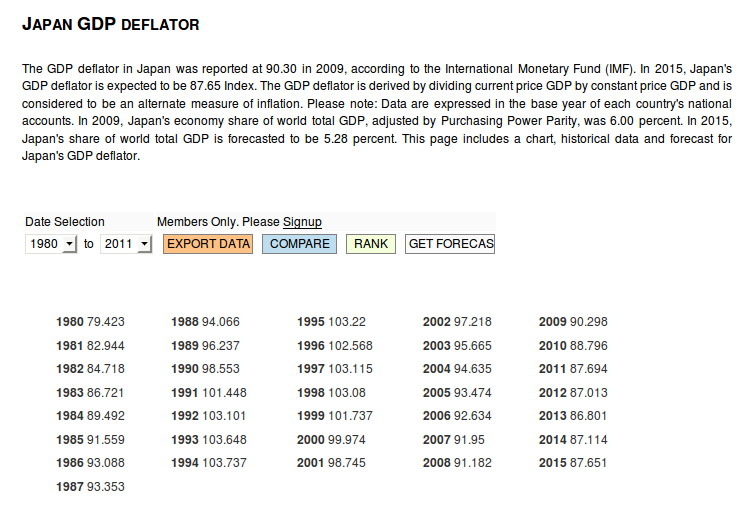 This index clearly shows that the GDP deflator in Japan has been negative since 1997. This is not price stability; it is deflation. If Japan had absolute price stability, the average result of the GDP deflator over the long term would not show much deviation, if at all. In 1997 the index was 103.115. If it was still around the 103 mark today, with movements between 101 and 105 in the intervening years, then that would constitute absolute price stability. As a result of this discovery, I have far less respect for the BOJ. Quantitative easing and an abandonment of mercantilist trade policy is what Japan should've done to prevent this deflation.

Here's another problematic graph.
Posted by One Salient Oversight at 20:39