No, though this is one way it can be achieved. The other way is through increasing tax revenue by broadening the tax base and/or increasing the tax rate. Any policy which results in smaller fiscal deficits can be termed austerity. Progressives who worry about the US Federal deficit but don't want to cut services only have one option: raise taxes.

No. Stable prices should be the number one priority of monetary policy (conversely, smoothing out economic peaks and troughs should be the priority of fiscal policy). Yet prices naturally increase or decrease due to changes in supply and demand. The goal of monetary policy should therefore be to ensure price stability over the long term. This has actually been achieved in Japan, where the inflation index has hovered around 100 since 1993, implying that prices have been more or less stable in Japan for the past 17 years. 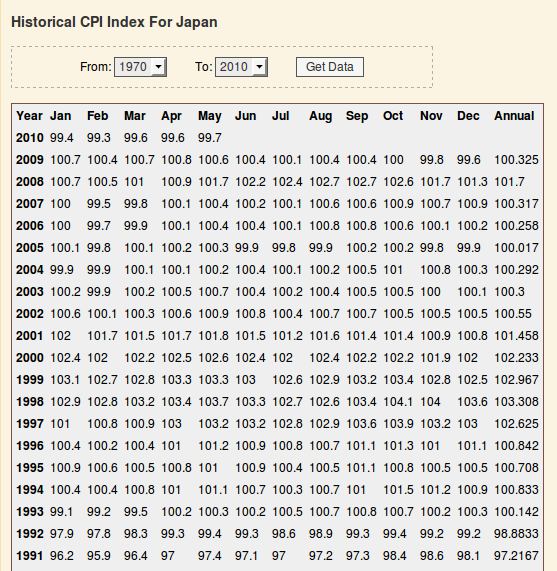 Which leads me to my next misperception...

Japan has a problem with deflation.

Not so. If stable prices are the goal then the Japanese Central Bank has done admirably. There has been neither inflation nor deflation over the long term in Japan since 1993. Any period of deflation has always been balanced out by a period of inflation. But is this really a good thing? Isn't Japan a basket case of an economy? My next misperception...

Japan's economy is permanently in ruin.

The following graph is from here. 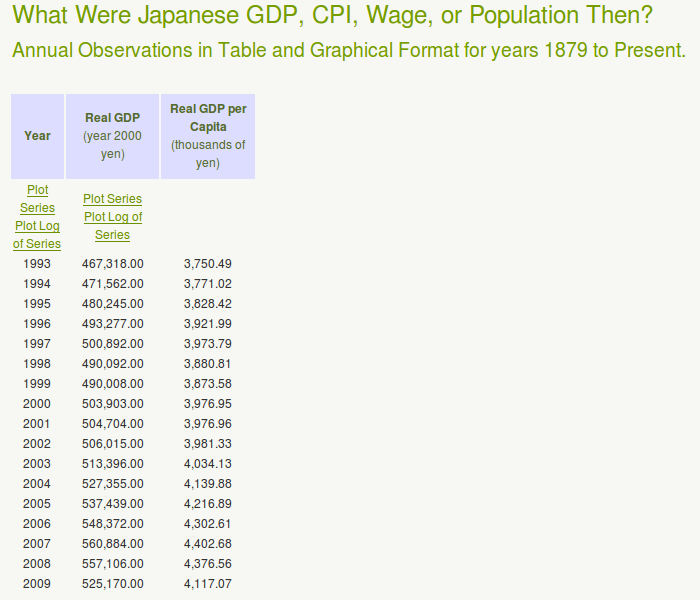 Since 1993, the Japanese economy has grown. Not only has it grown, but GDP per capita has increased during that period. Both measurements indicate that GDP growth and GDP per capita growth can exist during a period of absolute price stability.

Of course the figures in the graph above do show periods of economic contraction. Certainly the 1997-2000 period was difficult, as was 2008 and 2009, but the trend is most obviously upwards.

And measuring GDP per capita is important when you consider that Japan's population has peaked and is at the point of shrinking - I have argued before that shrinking populations don't have to be seen as a bad thing for the economy.
Posted by One Salient Oversight at 19:08