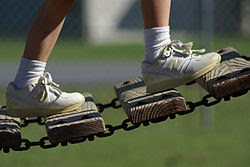 The figures show the deficit has narrowed by nearly $3 billion, or about a third, from the quarter before.

Australia's Current Account has been in deficit for decades. In the past few years, this deficit has reached around 7% of GDP.

A lot of this has to do with the commodities boom - Australia is rich in raw materials - while the 4th quarter is probably due to reduced consumption (3rd quarter GDP was +0.1%).

Now that the commodities boom is over and Rudd has put in a stimulus package, I would expect an increase in the Current Account deficit for the first two quarters of 2009.

Our currency remains low, though, which means our exports should be doing a bit better.