The US Gun debate - a problem in terminology 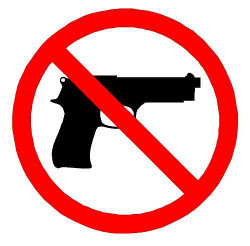 The image to the left is very clear. It says "No Guns". It is a symbol used by those on the Anti-Gun side of the current firearms debate in the US.

And it appears that the Anti-Gun lobby has some populist weight behind it. Poll after poll of Americans show clearly that they disagree with the arguments and logic of the Pro-Gun people, and want stricter laws, stricter background checks and bans on certain types of weapons.

But there's a problem here with terminology. The "Pro-Gun" people are called "Pro-Gun" because they support the 2nd Amendment, they support the right of people to buy and use firearms. What the phrase "Pro-Gun" does not support is the idea that people can buy their own personal tanks, surface to air missiles or nuclear weapons. Yet the phrase "Anti-Gun" is problematic, because it does not adequately reflect the ideas of those who wish for stricter laws. You see, for someone to be "Anti-Gun" means that they are against guns. Get rid of all guns, remove them from people's homes, etc etc etc. This is not the point of view of the (majority of) opponents of the "Pro-Gun" side.

Here in Australia we have laws against civilians owning assault rifles (automatic and semi-automatic) and other weapons that are the domain of the military. We allow people to buy and use handguns, though with a restriction on the amount of bullets they can carry. We also allow people to buy and use hunting rifles. Although our per capita gun ownership is a couple of magnitudes lower than the US, we still have people owning guns and, while we do have some level of firearm violence and misuse, the per capita numbers are very low.

And you know what? I think Australia's gun laws are pretty good. I don't think there's a need to tighten them. I'm happy that people can't purchase AR-15s but I would be unhappy if people were unable to purchase handguns. You see I have no problem with the idea of people owning a handgun or shotgun for home defence - some parts of Australia are quite remote and police response time would be measured in hours, not minutes. These people need guns. Farmers need rifles to shoot pests and put down sick animals. A metally fit and law-abiding citizen may choose to own a handgun. I'm happy for these people to have access to these firearms. But to have less restrictive firearms laws here would be a mistake. I'm happy where things are - they should not move either one way or the other.

So as you can see, while I support all reasonable means to reduce gun violence in the US - and this includes tightening access to certain firearms and banning others outright - I'm not "Anti-Gun". I don't wish to disarm the community completely, and I do not wish that Americans would universally disarm either. Yet the debate seems to be between those who are "Pro-Gun" and those who are "Anti-Gun". As a result, one of the arguments that the Pro-Gun side has used is the spectre of disarming a country and turning into tyrrany and to Nazism - which fits in very well with all the right wing garbage about Obama being the Muslim Kenyan Socialist Communist Nazi Black Panther that the completely ignorant and arrogant and easily confused eat up every day.

In essence, it's a straw man. The more radical and unhinged Pro-Gun side scream that the commies are gunna take their gunz, disarm America and give it over to the godless United Nations (probably headed by the Antichrist), with Jews, Blacks and Gays taking turns to rape and slaughter good Americans. But that's not what Obama is trying to achieve; it's not what I'm trying to argue, and it's not what the majority of Americans would want either. Having stricter gun laws does not mean universal disarmament and an eventual Communist takeover.

But it's easier to be labelled as "Anti-Gun" rather than "Stricter and more sensible gun laws".
Posted by One Salient Oversight at 21:34

I don't really see the need for high capacity automatic or semi automatic weapons. Not many things are going keep moving after I hit them with my pump action winchester. So that whole home protection thing seems a bit foolish to me.