Using the Monetary Base as a Recessionary Indicator

I've heard that argument so many times over the years I decided to look at the data. So I began keying in the increase in money supply using the AMBNS data series at the St Louis Fed when I saw this problem: 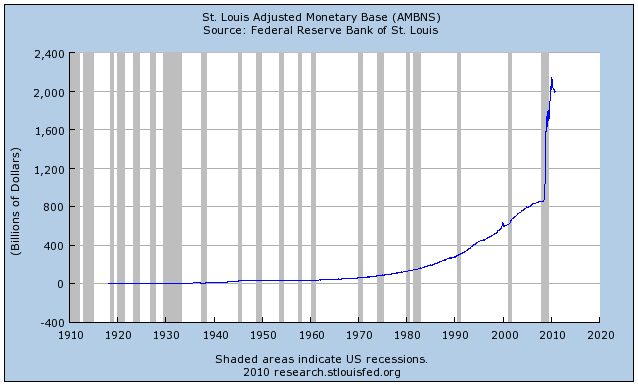 Yep, the monetary base seems to have gone into overdrive since the Global Financial Crisis hit. The problem was, though, that in a credit crisis banks and financial institutions tend to sit on their money. I then discovered the EXCRESNS data series at the St Louis Fed, which measures excess reserves: 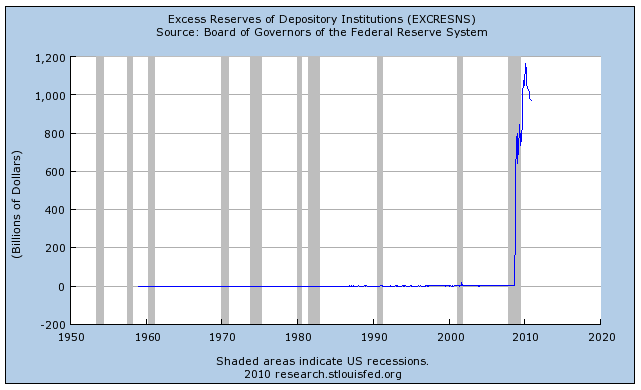 Yes well that graph is certainly frightening and pretty much confirms that the financial crisis we are experiencing is the worst since the great depression. Yet despite the fact that the Fed has been madly pumping money into the economy and increasing the monetary base (M0), "depository institutions" (ie banks, mainly) have sat on a lot of that money. In other words, a lot of the increase in money supply has been countered by a resistance to lend. Yet there is obviously a way to more accurately measure the net amount of money in the monetary base by removing the excess reserves from the monetary base figure. So to come up with the "Net Monetary Base", we get the M0 figure ("AMBNS") and take away the excess reserve figure ("EXCRESNS"). So I punched up the data into my spreadsheet and this is what I have come up with for the past 20 years: 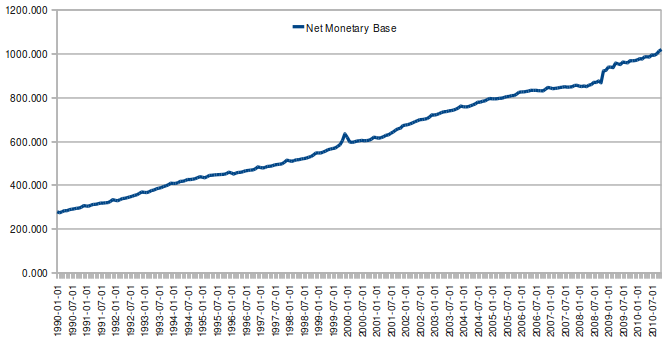 Well there we have it. A line going up. Woo hoo OSO you've done some great work there.

But it's not the actual amount of money we're interested in so much as the annual increase. So here's the year on year increase in Net M0, with recession bars thrown in: 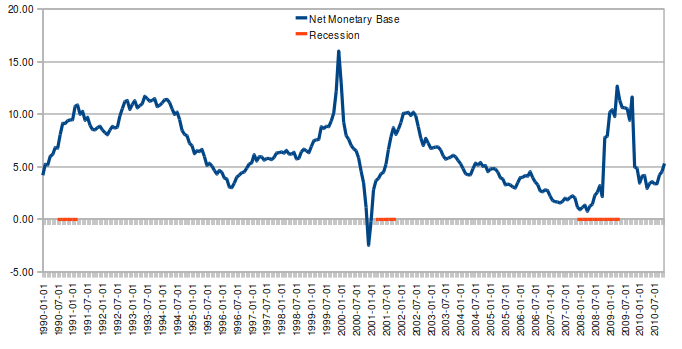 Now THAT looks more interesting doesn't it? In fact the most obvious question I had when I first made this graph was "What is that spike in the money supply in the middle of the graph?" According to the Federal Reserve Bank of New York:

A variety of factors continue to complicate the relationship between money supply growth and U.S. macroeconomic performance. For example, the amount of currency in circulation rose rapidly in late 1999, as fears of Y2K-related problems led people to build up their holdings of the most liquid form of money...

Interesting stuff. Yet there also seems to be another factor at play here, namely the fact that recessions seem to be associated with monetary bases that are only growing slowly. Let's look at the same graph for 1970-1990: Oh well so much for that theory I suppose. Look those four recessions in the 1970s and early 1980s - obviously the money supply was increasing before and after these recessions. If we connect the above graph with the 1990-2010 one we'll even see that while the increase in the money supply drops in the late 1980s, it is still increasing when the early 1990s recession hits. So it appears as though the experience of a contracting money supply causing a recession is only applicable to the last two recessions. Or is it? 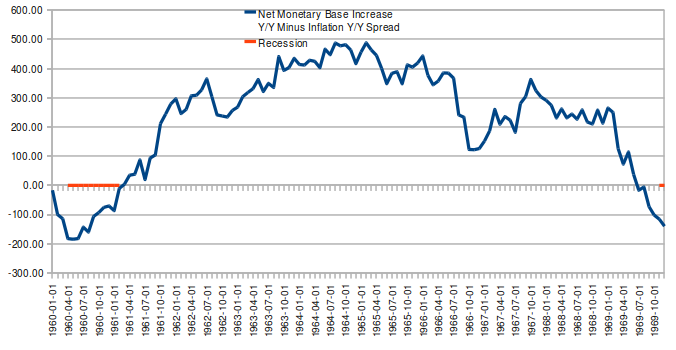 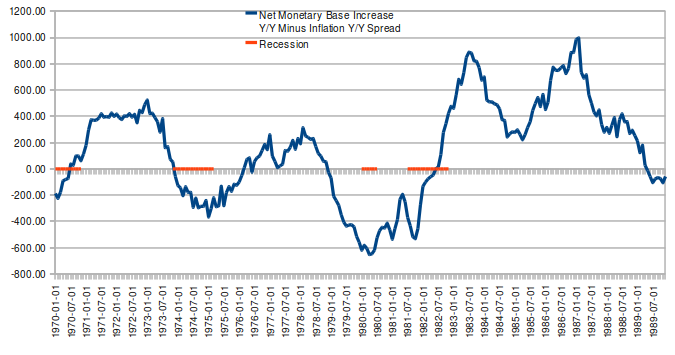 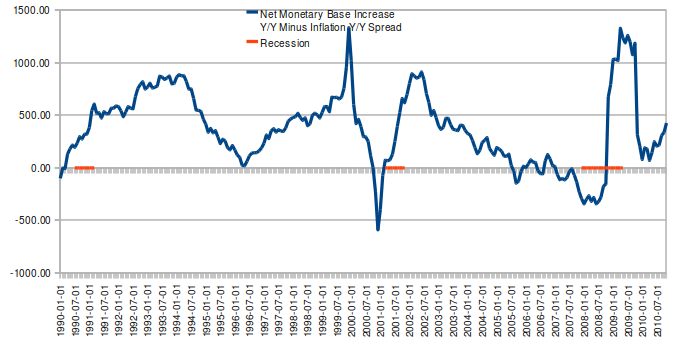 Bingo! Suddenly it all makes sense. Recessions occur whenever the spread between the Net Monetary Base and Inflation is negative. A negative result implies that inflation is greater than the increase in the money supply, which means that a real deterioration in purchasing power occurs. It is thus a reliable recessionary indicator going back to at least 1960.

Of course one of the characteristics of this indicator is that while negative results imply a recession, the actual recession may or may not be directly associated with that period:

Obviously if we keep a close eye on this spread, we can determine whether the economy is in danger of recession. At the present time (using data from November 2010), the spread is 426.61, which is healthily in positive territory. In fact, here's a graph of the last 36 months: 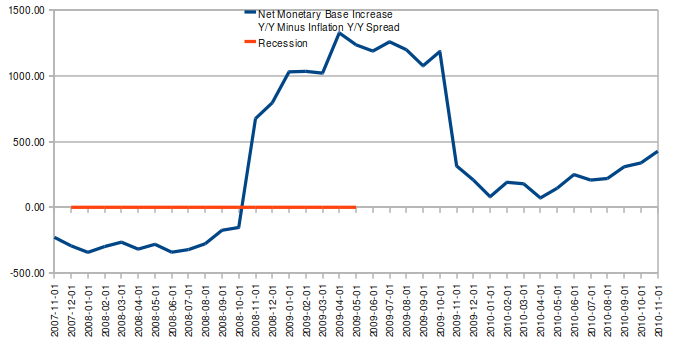 This shows that it was touch and go in the first half of 2010 as the spread neared zero but remained positive, but that things have improved somewhat since then.

To create this graph yourself you can download the following data from the St Louis Fed and use it in a spreadsheet:
The equation is simple:

Here is how the page in my spreadsheet looks with this data.

The monetary base is called M0, not M1.

You're right of course. Apologies for that. I have changed the post as a result.